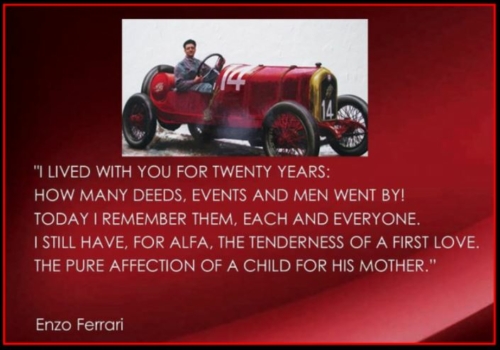 Enzo Ferrari famously raced for Alfa, as a driver, from 1920 to 1932.
Ferrari won his first Grand Prix in 1923 in Ravenna on the Savio Circuit.
Deeply shocked by the death of Ugo Sivocci in 1923 and Antonio Ascari in 1925, Ferrari, by his own admissions, continued to race half-heartedly. At the same time, he developed a taste for the organisational aspects of Grand Prix racing. Following the birth of his son Alfredo (Dino), Ferrari decided to retire and focus instead on the management and development of the factory Alfa race cars, eventually building up a race team of superstar drivers, including Giuseppe Campari and Tazio Nuvolari. This team was called Scuderia Ferrari (founded by Enzo in 1929) and acted as the racing division for Alfa Romeo, cementing the Alfa Connection. The team was very successful, thanks to the excellent cars, for example, the Alfa Romeo P3, and the talented drivers, like Nuvolari.
When Ferrari retired from competitive driving, he had participated in 41 Grands Prix with a record of 11 wins.
The Alfa legacy, much like the Ferrari one, can undoubtedly be attributed to Enzo’s involvement.

The Alfa Romeo 2000 GTV (Veloce) was introduced in 1971 and production ran until 1977. The 2000 was the replacement for the 1750.
The basic body shape was designed by Giorgetto Giugiaro for Bertone. It was one of his first major projects for Bertone, and borrowed heavily from his earlier design of the 2000 Sprint/2600 Sprint. The balance of glass and metal, the influence of the shape of the front and rear glass cabin glass, and the flat grille with incorporated headlamps were ground-breaking styling features for the era.
The engine was standardised throughout the range, with displacement of 1962 cc with a bore and stroke to 84 mm × 88.5 mm.
The engine produced 130 hp at 5500 rpm. SPICA fuel injection was fitted to cars destined for the United States and Canada, whilst carburettors were retained for all other markets, both systems produced the same power.
The interior trim was changed, with the most notable differences being the introduction of a separate instrument cluster, instead of the gauges installed in the dash panel, as in earlier cars. Externally the 2000 GTV is most easily distinguished by a grille with horizontal chrome bars, featuring protruding blocks, forming the familiar Alfa heart in outline, and smaller hubcaps with exposed wheel nuts.
Optional aluminum alloy wheels styled to the “turbina” design first seen on the Montreal.
“Turbina” refers to the wheel’s resemblance to a jet engine inlet.

The last GTV model was delivered in early 1975.
37,459 units were made before European production ended, though it continued until 1977 in South Africa at the Rosslyn assembly plant, with a further 25 being produced, all were right hand drive.
Ferris Cars is delighted to be able to offer this exceptional example of the Alfa connection.
Built in South Africa in 1974, this car is in exquisite condition.
Apart from a respray, in the original colour, twenty five years ago, the car is totally original.
Multiple Concours winner, recently “Overall Winner” at the 2021 Alfa Concours.
The car comes with the original bill of sale, original car cover, books and spare keys.
This is, without question, the finest example in South Africa.
Comparative cost in the UK, would be between £55,000 and £65,000.
This car is extremely well priced at
R749,990