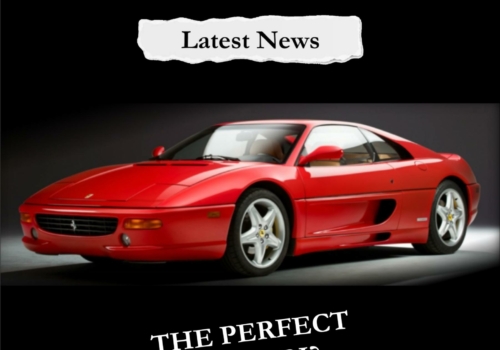 The Ferrari V8 is one of the worlds most iconic inventions.
Shoehorn it into a 355 Berlinetta, the quintessential Ferrari shape, strap on a manual gearbox, the only gearbox to have….in any car, bolt a Capristo exhaust on, and you end up with what can only be described as Automotive Pornography!

The 355 was sold from 1995 to 1999, and it was offered in three body styles. There was the convertible (spider), which a lot of people didn’t like, mainly because it spoilt the cars lines with the top up. There was also a Targa model, the GTS which was an odd in-between compromise between a convertible and a coupe. And then there was the 355 Belinetta, the coupe version, which, for many, is the most beautiful regular production road car Ferrari has ever built.
There’s no bad line on this car, no awkward angle. It came at a time when Ferrari was trying to leave behind the dated wedge shape of the 1980’s, and before they went with the rounder less aggressive look of the 2000’s. For a brief period, they got things just perfect.

Another reason that makes the 355 so great, is the manual transmission version.
Newer Ferrari’s with paddles might be faster, but nothing will ever take the place of manually shifting gears in a bright silver gate.
1997 was the last year that the manual transmission was mandatory. Beginning in ’98 Ferrari introduced the F1 style automatic paddle gearbox, which in the 355, was well……. Questionable. A bit slow, a bit jerky, a bit lurchy, but being as it was Ferrari’s first attempt at a production paddle shift box, it wasn’t too bad.

Now one of the most obvious quirks comes right away when you’re trying to get inside, because how do you enter a car with no visible door handle? Well you see, Ferrari trying to make this thing as beautiful and as perfect as possible, actually hid the door handle inside the 90’s style side strake. Interestingly, designers must have finished up on a Friday afternoon, because they couldn’t be bothered to hide the keyhole, instead they just stuck it on the door, in plain sight, for everyone to see.
Now once you get into the 355, you’ll notice two things simultaneously, that will be minimalism, and maximalism. The basic interior design is pretty minimalist. There’s no fancy screens or modern gadgets, even the gauges are just simple gauges, not on a screen with all sorts of readout’s.
As for maximalism, well, instead of modern gadgets and gizmos, Ferrari did what they thought their customers would appreciate; – they put leather on everything, everywhere, all over!
Obviously the seats are leather, and the dashboard is leather, and the door panels are leather too, but it doesn’t even come close to stopping there! The parking brake boot is stitched leather, and so is the little tray beneath the parking brake. The centre tunnel is completely covered in leather, except for the plastic parts that well……. just can’t be.
They even put leather behind the seats where no human, except maybe a two-foot contortionist midget, would ever possibly look.
The sun visor is of course finished in leather, and when you turn it over, you’ll find a surprisingly handy little pouch …… covered in leather!

Interestingly, the 355 has a sport mode. It’s a little toggle switch located in the centre console. Push it and it firms up the suspension for a sportier ride. Of course, this makes absolutely no sense whatsoever. Why would an exotic Ferrari need a sport mode … isn’t the whole thing a sport mode?!?
So, the 355 is a beautiful car, in the best body style, with the best colours, with the best transmission, and with a few little quirks, that you really need on an Italian car. This is a true Ferrari! The perfect Ferrari! And we haven’t even gotten to the best part …………. driving it.
While the latest Ferrari has 48 trillion horsepower and does 0 to 60 microscopically faster than the one that came before it; the F355’s 3.5 litre V8 only made 375 horsepower and it did 0 to 60 in around 5 seconds, it’s more of a sports car than an exotic supercar, so how does that translate to the road.
This car comes from a different era of exotic cars, – today, they try to make cars useable, comfortable and drivable, – the thing with the 355 was, just make it fun and to hell with the girly kak!

The 355 makes one of the most beautiful sounds of any car ever made, in the history of cars, ever, on the planet, of all time!
The main reason the 355 is so special is simply this, it isn’t overpowered, it’s not too much to handle, it’s a car that you can bomb down back roads with, and just enjoy and have a blast.
It’s not slow by any stretch, but interestingly, it isn’t incredibly fast, it’s in that perfect band, that you wish all cars could be in. That’s what makes it an absolute joy to drive. The 355 has so much more of a go-cart feel than a modern Ferrari, it even has more of a go-cart feel than the 360 which came next.
The clutch is easy to operate, anybody can drive this car.
Ferrari made the switch from old-school to modern exotic, when this car left and the 360 showed up. But more and more people are having an appreciation for these older exotics.
There is nothing more exciting than a gated shifter, It’s a shame everybody didn’t do it, seems nobody wants to do it anymore. – Man, that gear change! – Oh, that clink between the gears is intoxicating.
Once you get a gated shifter, you get it, and it feels so good to slot that gear into that gate, it’s just the most perfect feeling you’ll ever have!

Now for people who want to drive a really fast car, and want to mash the throttle at the robots, and be faster than everybody else on the road, this ain’t the car, – this is the car for people like who like to go on a Sunday morning and burn up some great back-roads, really use the whole engine, and really be able to down shift a gear and ring it out and hear it and feel it, – that is what this car is all about, and it may have been the last Ferrari that was really like that.
The truth is the F355 is the quintessential Ferrari experience, it is everything you’ll ever want in a sports car, it’s beautiful, has perfect body lines, a manual is the right transmission, it’s quirky and cool, and it’s amazing on the road, without being unusably fast, it is just the perfect Ferrari!