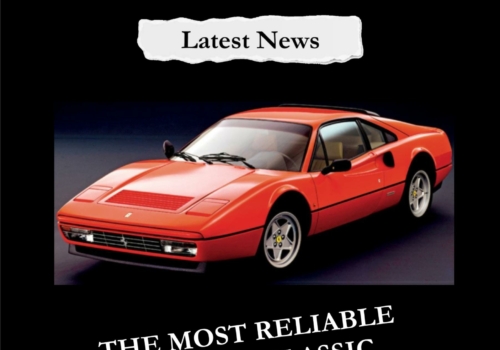 By Dee MunroDecember 7, 2021No Comments

Trading in the Ferrari 328 model range seems to have ground to a halt lately, but it’s the same with most “modern classics,” as soon as Puff Diddly Daddly or Snoop Doggy DooDoo put out a video with a Ferrari in it, everyone wants it!
Thomas Magnum obviously started the trend with the 308, after appearing in his TV show, it became one of the biggest selling Ferrari’s.
To a lesser extent, Miami Vice did it with the Testarossa and Bad Boys with the 355.
The 328 however, seemed to dodge all the hype over the years, despite, in many ways, being superior to all of them.

The 328 is a true driver’s car in every shape and form.
It does not have eye popping and ear bleeding amount of horse power like the modern supercars do.
A souped up civic can beat it, but if all you care about is 0 to 60 numbers and quarter mile times then you might as well stop reading now.
Numbers mean nothing when it comes to the 328.
How the car makes you feel is what strikes a chord with a true car enthusiast. Driving the 328 is like driving a go cart. The chassis is stiff and rigid, the handling is amazing, the car is small and nimble, and the sound of the engine is just a joy to behold.
The clutch is light and precise and the gated shifter is from the Gods, there is no other way to describe it.
The cabin is surprisingly spacious with all the controls at your fingertips. It’s a very easy car to drive. As with most Italian sports cars of the era, the seating position is a bit awkward as the pedals are shifted to the right, but you get used to it in no time.

There is really nothing out there that comes close to the feeling of driving a classic Ferrari.
It has to be an event, a sense of occasion.
The simplicity of this car is what draws you in.
There are no infotainment screens, no navigation, and no stupid computers beeping and screaming at you all day long.
It is just you and the car, the way Enzo intended it when Ferrari’s first started rolling off the factory floor.
A drive in a 238 is guaranteed to leave you with a smile on your face!

The 328 is considered one of the most reliable classic Ferrari’s.
An evolution of the 308, launched in 1975, it’s a relatively simple car, free from electronic wizardry.
Bosch K-Jetronic mechanical fuel injection was the order of the day here.
Unlike many Ferrari’s, a 328 cam belt service can be carried out without removing the engine.

Fuel economy is quoted as 12.9 L/100km at a constant 86 km/h, and probably mid to high teens if you give the car a workout.
That’s better than some modern cars!!
So, if you haven’t got a 328, best you think again and do something about it!
Look after your 328 and it should be an appreciating asset.
With luck, that rise in value could outweigh the running costs altogether.