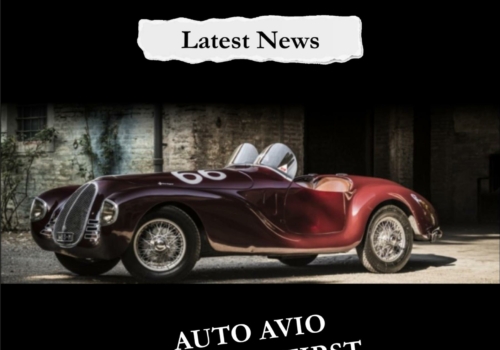 That was a famous quote by Enzo Ferrari, and words that are being reiterated by the company in celebration of Ferrari’s 75th Anniversary.

Ferrari is introducing a 75th Anniversary logo to commemorate Enzo Ferrari setting up shop back in 1947.
While his first car was the Auto Avio Costruzioni 815 in 1940, the 125 S race car introduced seven years later was the first Ferrari-badged model in history.
On February 17th, Scuderia Ferrari will take the covers off the 2022 Formula 1 car and reveal it to the world.
The Italian team has already announced that the car will be called:

Whilst the first-ever car to wear the Ferrari badge was the 125 S, in 1947; seven years earlier, Enzo Ferrari created the Auto Avio Costruzioni 815.
It never bore his name, but it is the very first car built by Ferrari.
There is only one remaining Auto Avio 815 example in existence, and as such, you would think it would be housed in a room made of Tungsten, built on a hill only accessible by unicorn, and guarded by a three-headed dragon, but no………………………….
The Auto Avio is kept in an old castle, in a town called Panzano, a stone’s throw from Modena, in a room that looks like the roof may give way any minute.

When Enzo left Alfa Romeo in 1939, he had to agree not to use the Ferrari name, or be involved in motor racing for four years.
While the official line these days is that Enzo “quit… to set up his own company,” he was in fact (as he himself admitted) fired.
As Brock Yates wrote in his seminal biography of Enzo Ferrari, the firing became “something of a cause celebre in the Italian sporting press,” and led to a minor palace revolt at Alfa Corse, with other top names, such as Enrico Nardi, joining Enzo as victims of the bloodletting.
But this was 1939, there was bloodletting of an altogether more serious kind spreading across Europe.
To again quote Brock Yates, “Even as the acrid smell of cordite drifted slowly south over the Alpine peaks, Enzo Ferrari had one final gesture of defiance in mind before Italy plunged into the fighting.”

Enzo’s act of defiance was the result of a visit in December 1939, from the young Alberto Ascari, who wanted Ferrari to build two sports cars for the 1940 Mille Miglia, one for himself, and one for his friend, who went by the wonderful name of Marchese Lotario Rangoni Macchiaveli di Modena.
Enzo agreed, and his decision was a middle fingered gesture aimed at Alfa.
Since the Mille Miglia was scheduled for 28 April, they had just four months to create two racing cars from scratch.
For this reason, and also because the regulations demanded that a production car chassis form the basis of the racer, the new cars were based on the Fiat 508C Ballila.

The main problem was that the Ballila’s engine was far too small.
So Alberto Massimino, a highly experienced designer and another victim of the Alfa revolt, came up with the plan of building a straight-eight engine block and topping it with a pair of modified Fiat Ballila cylinder heads.
The new car’s name: 815 refers to the engine’s 8 cylinders and 1.5-litre capacity.

Meanwhile, the open-topped, large-grilled bodywork with its ultra-modern Plexiglas windscreen was styled by Carrozzeria
Touring Superleggera, and the cars were fitted with Borrani wire wheels.

The potential of the cars was proved in the Mille Miglia itself, as both led the 1500cc class in turn, before suffering mechanical problems that forced them to withdraw, hardly surprising when only four months previously, the two racers had been nothing but a twinkle in Enzo’s eye.
They were clearly worthy of further development, but Italy’s rapid entry into the ongoing war put paid to any such plans. By 1945, Enzo was free to develop cars with his own name, the first being the famous Ferrari 125 S.
There’s little doubt that Enzo learnt a great deal from his act of defiance and the ‘secret’ Ferrari of 1940.

The last remaining Auto Avio 815 currently belongs to Mario Rhigini and, as if owning the rarest Ferrari on the planet wasn’t enough, he also owns a couple of hundred other cars …………………. including an extremely rare Alfa Romeo 8C 2300 Monza, which was personally owned by Tazio Nuvolari, a Mercedes Benz once belonging to Adolf Hitler,
a Formula 1 Ferrari 512T raced by Gilles Villeneuve, Benito Mussolini’s private car, the fearsome “cigar” on four wheels,… the unique Fiat Chiribiri, powered by a 7-litre, 300-horsepower aircraft engine!
Plus, hundreds more significant, historic vehicles.

Rhigini was renowned for buying all the scrap, test and crashed race cars that Ferrari discarded.
He purchased the Auto Avio (Chassis 021) from Enrico Beltracchini, who raced the car in 1947 before selling the
car to a museum. After re-purchasing the car, Enrico sold it to Righini.
As of 2020, the car remains in the Rhigini Collection.
Mario Rhigini can regularly be seen tearing up the streets of Panzano when he takes the Auto Avio out for a spirited Sunday drive ……………………….. something that takes big kahunas, in something so rare!!