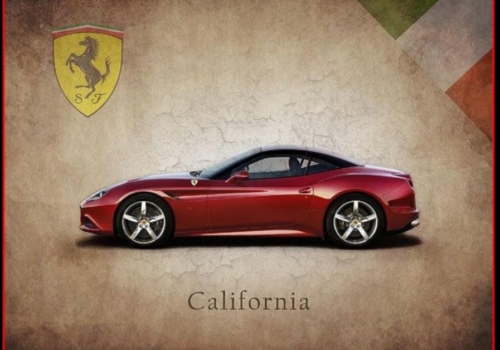 When originally unveiled in 2008, the California was powered by a front-mid mounted, rear-wheel drive, naturally aspirated 4.3-litre V8. In 2012 a lighter, slightly more powerful variant, the California 30 was introduced, and in 2014 Ferrari announced the second generation of the model, named California T, powered by a new twin-turbo 3.9-litre V8.

The car revived the name used on the late 1950s Ferrari 250 GT California Spyder and the 1960s 365 California. The modern California was originally introduced as an entry-level model, however, it included many new design innovations from Ferrari. The original base price of the California was similar to the base price of the F430, the company’s V8 flagship sports car at the time of its introduction.

In 2018, the California was succeeded by the Portofino.

The chassis was designed and manufactured by Ferrari division Carrozzeria Scaglietti. Overall, it is considered a landmark car for Ferrari, in that it represents a number of concepts being used for the first time in their road cars:

The California is equipped with an exclusive Ferrari-designed F1-Trac system. The system, originally introduced on the 599 GTB Fiorano, was updated for the California model. The variable power distribution to the rear wheels allows greater stability and performance when turning. The result is an average increase of 20% in acceleration when exiting corners.

The California was available with two passenger seating configurations. Option 1, included two rear seats that are limited in space and arguably only capable of accommodating small child safety seats.

Option 2, did away with the rear seats replacing them with a bench storage area. This storage area could accommodate slightly more luggage or personal effects than the seats and included matching leather luggage tie-down belts.

The California was manufactured in a purpose-built facility that was constructed adjacent to the existing factory at Maranello.

The new facility was part of Ferrari’s Formula Uomo programme that started in 1997 to improve production, safety and employee happiness.

Production of the California amounted to about 8,000 units spanning between 2008 and 2012.
Throughout the modern California’s history (2008 to 2017), only 3 cars were built with manual transmission.

On 15 February 2012, Ferrari announced the California 30, an updated model that was lighter and more powerful. While the Pininfarina design remained unchanged, the changes included reducing body weight by 30 kg and increasing power output by 30 hp (hence the monica ”30”).

First unveiled at the Geneva Motor Show, in March 2014, The “T” in the moniker stands for Turbo, a technology Ferrari last used on the F40. The “T” utilises a new 3,855 cc twin-turbocharged V8 engine that produces 553 hp, and has a 7-speed dual-clutch transmission with different gear ratios, a revised MagneRide adaptive suspension, as well as a new F1-Trac system.

The California is a surprisingly quick car, Ferrari’s first real exploration into the world of the “daily” driver, this car certainly ticks all the boxes for such criteria. The California behaves well in traffic and, when you want to be a hooligan, it’s perfectly at home doing that.

Responsive, comfortable and versatile, it performs all the tasks set out for it by designers, engineers and imagineers in Maranello, with style, class and ease. The slippery aerodynamic shape has aged well in its ten-year existence. The California will, like its 250 and 365 predecessors, probably become a sought after classic.

Ferris Cars is pleased to be able to offer this

Representing extremely good value for money, this particular California
has been lovingly cared for and is in exceptional condition.

Face or Boobs? read our Newsletter 36 and decide for yourself!