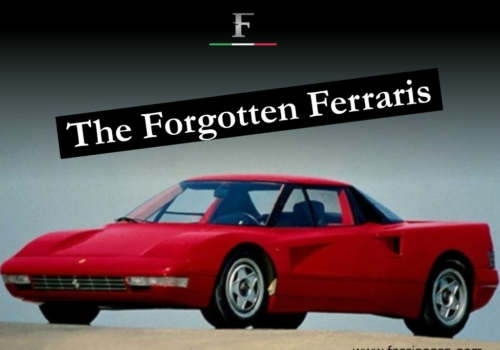 Some will say that there has never been an ugly Ferrari.
It’s true, Ferrari are renowned for making exquisite works of art that function as automobiles; the beautiful lines of the Dino 246, the astonishingly fetching 250 California, 250 GTO and Lusso, the striking wedge shape of the Testarossa, the low, wide and quintessentially shaped 355, the list goes on and on and on.
But even Ferrari can have a “bad day” in the design office, resulting in the forgotten Ferraris.
It seems as if some of the following cars may have been designed by someone suffering from a severe babalaas, or had just had some seriously good (or bad) weed, or both……
Beauty is undoubtedly in the eye of the beholder!

According to many aficionados, this forgotten car is the first four-wheel-drive Ferrari ever made.
Only two prototypes were ever produced.
The vehicle had a variety of problems on the inside, followed up by a bizarre look on the outside.
These days the vehicle is only used for display purposes. One can be found at the Galleria Ferrari, in Maranello. It wasn’t to be the end for four-wheel innovation however, Ferrari would resurrect the concept in 2011, with the FF.

This 1970s Ferrari doesn’t look like the classic Italian luxury car, however, you might think it is really cool……. If you’re 12 or looking for a sporty hearse.
Nonetheless, it certainly catered to the psychedelic 70s.
Based on the 365 Daytona, this version was nicknamed, “Harrah Hot Rod”.
In the late 90s one example sold for just under $700,000 at an auction. That’s a cheap price point when assessing the rareness of such a car.
If you could find one for sale, you could expect to pay in excess of £1 million today.
Now despite the fact that it’s known as a forgotten Ferrari, the company still produced over 1,000 units.
That’s a lot more than most Ferrari enthusiasts would have expected.

The Testa D’Oro might be remembered for all the wrong reasons.
Thankfully, only one was produced.
Despite the awful design, the goal was to make this vehicle among the fastest Ferrari rides ever. Instead, designer Luigi Colani built a forgotten Ferrari model most do not recall.
The modified version produced a sizzling 700 horsepower.
For those curious, the car has a worth of just under £2 million these days.
Not bad for a car that looks like it was built in 2050.

Better known as the “egg shaped” Ferrari, this is one of the lesser-known models dating way back to the 1950s. It isn’t a prototypical Ferrari look, that’s for sure, however, it’s a unique concept and one that shouldn’t belong to the forgotten Ferraris.
This particular example sold for $4.5 million at a Pebble Beach Auction.
Ferrari collectors might consider this a steal.
Created by Franco Reggiani, the car remains in remarkable condition, having once raced competitively.
In the mid-80s the vehicle was completely restored and now resides in a private collection.
It’s one of the better Ferrari’s car enthusiasts might have forgotten about.

No need to rub your eyes. Yes, feast those eyeballs on this rare Speciale.
A vehicle so good that employees of Ferrari actually needed to roll it out for the public to see… without an engine, the goal was to showcase the stunning exterior, and nothing else.
Created in 1969, only one version of the car was ever created. Perhaps the car would not have become one of the forgotten Ferraris, had Ferrari given it an engine and produced a few units.
Based on, and with styling cues from the P3, the 512S never actually made it to the production line……….Shame!

As much as all of the above Ferrari’s are forgotten, we explore one that certainly is not in Newsletter 39.