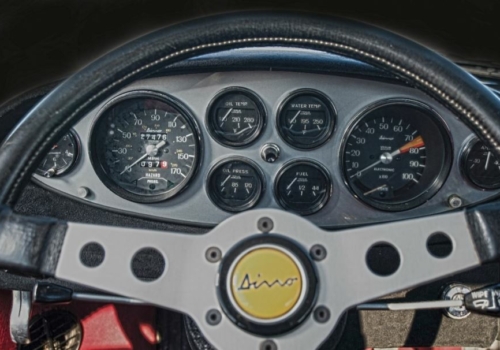 In the mid-1960s, designer Sergio Pininfarina presented Enzo Ferrari with sketches he’d made of a small, swoopy, mid-engine sports car that he felt Enzo should build. Up to then, all Ferrari road cars were front-engined, but the automotive world was changing rapidly, most notably with the introduction of the Lamborghini Miura, the world’s first-ever mid-engined sports car. Enzo relented and agreed to build the car presented by Pininfarina, but only if it had a relatively small, less-powerful engine, Ferrari was afraid that his customers were not capable of handling a mid-engine car safely!

To power this car, Enzo chose a V-6 engine design that his son Alfredo (nickname Dino), had helped develop for racing. Alfredo had passed in 1956 from effects related to muscular dystrophy, but the engine he helped design had given Ferrari a Formula 1 world championship in 1958.

Enzo decreed the car would be called “Dino” in tribute to his late son and would bear no prancing horse, or the word Ferrari. Because Ferrari was required to mass-produce the engine for homologation and lacked the capacity to do so, he called on Fiat to cast and assemble the 2.0-liter V-6 in a partnership that saw Fiat able to produce its own front-engine Fiat Dino road cars.

While the five-speed manual transmission was retained, there were many changes, including a switch to steel for most bodywork and the engine’s bottom end (a push towards cost and production efficiency), a small lengthening of the wheelbase for more stable handling, and the introduction, in 1972, of a GTS model with a  removable Targa-style roof panel.

Hand assembly of all Dino’s was carried out by Ferrari in the  Modena factory, on the same production lines as V-12 cars. The Dino has become iconic among Ferrari enthusiasts and collectors. Prices have risen dramatically over the years and good examples will always be a shrewd investment.

Meticulously cared for, this matching numbers car is a fine example of this iconic mid-engine collectible.
P.O.A.