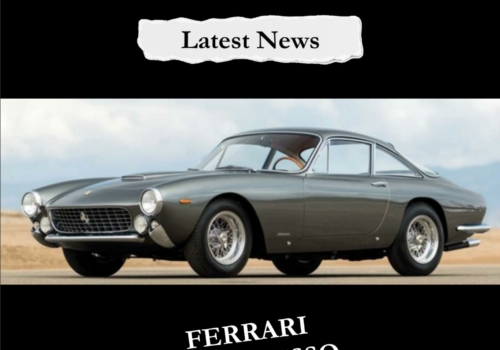 Ferris Cars has some exciting things lined up for the year ahead.
More events.
Some exciting social media content.
Revolutionary new cryptocurrency options.
More fun Rhino stuff.
Watch this space!
In the meantime, you know you are always welcome, so pop in for a coffee and a chat ………….even if it is just to talk about cars and shit!!!!

When it made its debut at the 1962 Paris Salon, the Ferrari 250 GT Lusso was unveiled as the final iteration of the 250 GT series of cars.
The Lusso, which means “Luxury” in Italian, was positioned between the more hardcore racing models and ultra-luxury variants within the Ferrari lineup.
It aimed to offer the experience of top-tier Ferrari sports car performance while being well-appointed with an arsenal to combat the demands of daily use.

The 250 Lusso is considered by many to be one of the most beautiful cars to be adorned with the prancing horse badge.
Its sporty nature is derived from the use of a Short Wheel Base (SWB) chassis, shared with some of the previous competition cars, and a V12 engine fueled by three Weber carburettors.
The overall design elements of the car were ground-breaking for their time, and the Ferrari 250 GT Lusso would soon become one of the most recognisable automobiles in the world.
Exquisitely proportioned, the GT/L had an elegant silhouette which comprised of its elongated profile, curvy fenders, slim pillars, truncated rear and charismatic three-piece front bumper.

The Ferrari 250 GT Lusso was imagined by Pininfarina and brought to life by Carrozzeria Scaglietti under the direction of Enzo Ferrari.
While the GT/L was intended to be a road-going grand tourer in every sense of those words put together, many owners ended up outfitting their cars for racing anyway. This is because the GT/L inherently possessed race car DNA, which is shared with the 250 GTO, including its SWB, disc brakes, suspension, and engine, making it a viable track toy when the latter was not an option.

Though well-received and sought after, the GT/L would ultimately have a brief production run spanning just 18 months, between the years 1962 and 1964, with only 350 examples made. At the tail end of 1964, the Ferrari 250 GT Lusso, and by extension, the entire 250 GT line, would be succeeded by the incoming Ferrari 275 GTB.
This would by no means signify the end for the GT/L, as it has become a hot collector’s item in recent times.

The Ferrari 250 GT Lusso is the quintessential 60’s sports car.
Driving any Ferrari from the same era is a tremendously special experience, of which few of us have had the privilege.
The 250 is rare, expensive and highly collectable, but its value is based on the engineering, remarkable style and elegance, coupled with the exceptional performance and handling of that particular era, all of which made it ahead of its time when the car was launched in 1962.

THE FERRIS CLINIC IS NOW OPEN FOR 2022, AND
THE DOCTOR IS READY TO HELP!

We don’t have a PhD, nor any formal medical training, but we do have a vast experience and understanding of your condition.
The bad news is that your illness is not curable, not terminal, but not curable, and is something you are going to have to live with ……….. probably for the rest of your life.
Some of our clients claim different ailments related to their illness. Some speak of a feeling of petrol running through their veins. Some talk of sweaty palms and accelerated heartbeat when visualising or being in close proximity to certain items of a mechanical nature.
Some patients, who are currently being treated, claim to have a much more fulfilling life, a sense of contentment and, in some cases, a better sex life, all due to the therapy and treatment we have prescribed.

This illness, unlike many others, has taken on various names over the years.
An extreme case is called, “Mechanophilia”. The most common is called, “Paraphilia”.
Locally, the most common term for this illness is
“Motor” or “Petrol” Head.
The best news of all is that our mission is to make living with your illness, as comfortable and enjoyable as possible.
Over the years we have developed some proven therapies to help alleviate the many varied symptoms.
If you think you may be experiencing any of the symptoms mentioned above, don’t delay, call Ferris immediately, and get professional help in dealing with this terrible illness.

Did you enjoy reading about this Ferrari Icon? Read about another one here.