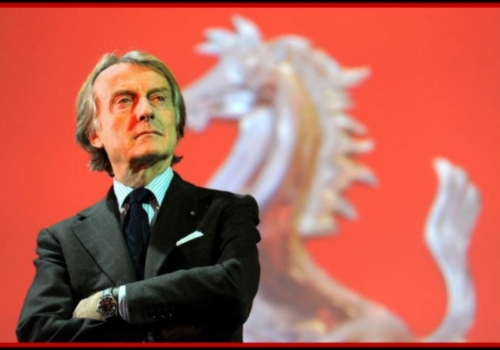 Ferrari has just announced a new CEO, 52-year-old Benedetto Vigna.
He’s a Subnuclear Physicist and is currently heading up one of the divisions at STMicroelectronics.
His appointment is to replace acting CEO John Elkann, who stepped in temporarily after the sudden resignation, on health grounds, of Louis C. Camilleri.

Whilst this new appointment seems very promising, and his technical and electronics knowledge will certainly be a boost for the road car division, will Mr. Vigna be able to lift the company and bring Ferrari back to the fore in the world of Formula 1? – A task which most of his predecessors were unable to complete, with the exception of Luca Di Montezemolo!

Here’s a list of CEO’s and the Formula 1 world titles they achieved:

In Italy, Luca Cordero di Montezemolo, is practically royalty.
If you don’t know who he is, and you should, he’s the guy who turned Ferrari into a championship-winning team and, along with Michael Schumacher, assembled what came to be known as, “The Dream Team.”
Luca’s impressive career started after racing cars for Fiat 500 in Italy and later in the auto manufacturing conglomerate at Fiat.
In 1973 he moved to Ferrari, becoming right-hand man to Enzo Ferrari himself, before becoming manager of Scuderia, Ferrari’s Formula One racing division.
Montezemolo’s incredible impact on Ferrari was apparent from the day he joined, and with him, on board, they went on to win the Formula One World Championship with Niki Lauda in 1975 and 1977.
In 1977 he was promoted to a senior manager position at Fiat, before going on to occupy a number of similarly important positions within the Fiat empire.

When Enzo Ferrari passed away in 1988, the call came from Gianni Agnelli, the principal shareholder at Fiat, asking Montezemolo to rebuild a floundering Ferrari company which was both in disarray and potential collapse. Montezemolo is quoted as saying, “I know what’s wrong with Ferrari, and I can fix it!”
Montezemolo made crucial changes to Italy’s most famous racing team, including signing Niki Lauda as a consultant and promoting Claudio Lombardi to the team manager, ultimately resulting in the resurrection of Ferrari from being drenched in serious debt to making a proper annual profit.
In the early nineties, Montezemolo persuaded, then double world champion, Michael Schumacher to join Ferrari. Michael agreed on the basis that he could assemble the team of his choice. Together they acquired the talents of Ross Brawn, Rory Byrne, Jean Todt, and Paulo Martinelli. This dream team would go on to secure five drivers’ world
championships and seven constructors.

As well as the Scuderia Racing division, Luca was also responsible for innovations in the road car division.
He introduced the first all-aluminum space frame chassis, used on the 360 Modena and subsequently, the basis for all road-going Ferrari’s since.
He played a major role in Niki Lauda’s two Formula 1 titles in 1975 and 1977, bringing the Scuderia back to its winning ways.
It is thanks to Luca Di Montezemolo that Ferrari’s road car business is a success today.
In the 1990’s he turned the company from a loss-making entity into the profitable, iconic brand we all know and love today.

In 2015 Luca Di Montezemolo was inducted into
the Motoring Hall of Fame, an honour he dedicated to his friend Michael Schumacher.

Luca Cordero Di Montezemolo.
A man undeniably worthy of the title, “Ferrari Icon.”
Maybe Ferrari should bring him back to sort out their current woe’s.

Nqobile Madlala from eNCA Drive chats with the Ferris Team to gain insights into the Ferrari market, buying a car with Bitcoin, and considerations for an investment in your dream car!