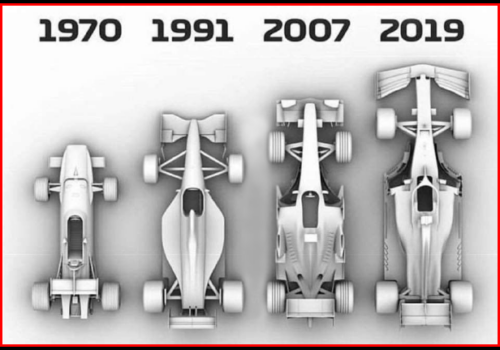 Formula 1 cars have got absolutely enormous.
Since the start of F1, they’ve grown and grown, with them now being both longer and wider than a Ford F150 pickup truck, and this has to be a bad thing, the cars may be quicker now – but they don’t look nearly as fast as they used to. So, why have they got so big and, is there still hope for smaller Formula 1 cars in the future?

First, let’s cover why does it actually matter that these cars are getting bigger and heavier? They are the fastest racing cars out there, lap times are faster than they have ever been, and, quite rightly, pushing the envelope of what is physically possible.
From the outside, the speed is absolutely astonishing, but from onboard, the cars don’t look like they are going any faster than say, a GT3 car.
larger cars make it more difficult to pass. A wider car fills more of the track, making it easier to defend. In MotoGP, for example, they have to defend by just being faster, you can’t block very much of the track, consequently, there is a lot of overtaking.
In the current Formula 1 scenario, there are some tracks with very few places, e.g.; Monaco (below), where you can actually fit two cars side by side.
But, at the risk of venturing into, ‘it was better in the good ol’ days,’ territory, let’s dive into the reasoning.

The width of the cars has gone up and down over the years, but from 1997, the width was reduced from 2m to 1.8 meters, as part of a collection of rules targeted at slowing the cars down in the interest of safety.
It did a pretty good job, cars were slowed significantly, and this was for a number of reasons.
A narrower car means a narrower chassis with less space, so a lot of the components needed to be mounted higher, and typically this raises the centre of gravity.
It brings the tyres closer to the car, and therefore the tyre wake with it, this means there is more dirty air disrupting the floor and the downforce generation on the rear of the car.
So the cars got shorter to allow for better balance in the corners, a side effect is that they were very light, around 600 kilograms, and this meant that they were really agile and, due to the comparatively unrefined suspension, they looked alive and resulted in smaller Formula 1 cars.
The narrower cars stayed around until 2017, when they returned to 2 meters to try and add more drama to the sport.

The biggest difference between the cars of today and the 90s, is the length. The cars are nearly a meter longer now. The length has been rising enormously since 2017. Turns out, the reasoning behind this is pretty clear.

Whilst the regulations don’t directly control the length of the cars, there are regulations on the maximum overhangs, front and the rear. Maximizing this allows them to create larger wings that are further away from the wheels, increasing the effect of the downforce on tyre grip, but the wheelbase is actually unrestricted.
The increase in length is mainly down to the turbo hybrid engines that were introduced in 2014. They come with far more baggage than before, like batteries, regen systems, an electric motor, 110 kilograms of fuel, larger safety cell and lots more telemetry and cameras, etc.
All of this has to go in somewhere.
Trying to fit all this into a shell from the 90’s would be absolutely impossible.

Mercedes have adopted the longest wheelbase for aero reasons.
The longer the wheelbase, the more aerodynamic surface you have, which makes an enormous difference. It also means they can run less rake, which in turn means the rear isn’t as high and there’s less drag on the car. It also typically lowers the centre of gravity, so you can place components lower, improving cornering ability in the faster corners.
It’s not all good news though! The longer the wheelbase, the less agile the car is. This is why the Red Bull is normally faster than the Mercedes through the slower corners. The shorter wheelbase, higher rake design, allows for cars to be much better on turning, and rotate better through the slower corners.
With the addition of hybrid systems, additional safety and removal of in-race refuelling, the FIA have had to increase the minimum weight of the cars in order to keep safety a priority. Subsequently, with strict limits on width, the cars have naturally got longer.
It must be said however, that the cars are longer, wider and heavier, because the rules have pushed them in that direction.

The real question is, could they actually fix it?
Obviously they can’t magically shrink the car to less than it is now whilst keeping all of the additional safety, the hybrid and everything else that comes with these new cars.
The Le Mans hyper cars, Indy cars and some of the lower formulae seem to have managed to run shorter cars with the same components as F1.
So, it stands to reason, if the regulations were to force the move to smaller cars, the teams would manage it.
And the good news……….. they are!
The 2022 Formula 1 regulations are mandating a maximum overall length of 5.63 meters, and a maximum wheelbase of 3.6 meters. Admittedly this is only a hundred millimetre reduction from the length of most of the current cars, and actually no reduction for the current Ferrari, but it is a step in the right direction.

Wouldn’t it be fantastic If this is what next year’s car looks like!

These new 2022 regulations look really exciting, – promising smaller Formula 1 cars, simpler aero and much better overtaking.
The even better news for us as Ferrari fans, is they already have a car that complies with the new size regulations, so logic would dictate, we have an edge! All Ferrari need to do is up the power, and with Merc and Red Bull having to compromise their current layouts, we should be in with a shot next year!
Here’s hoping!!!