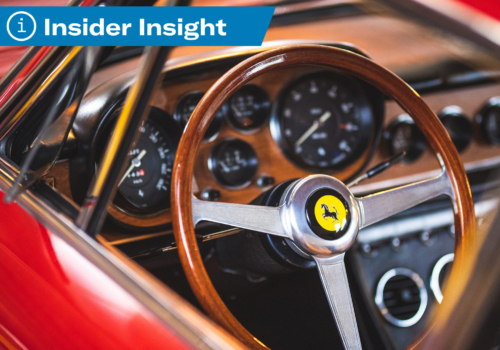 Newsletter 34: BY THE NUMBERS: THE STATE OF THE FERRARI MARKET

There are collector cars, and then there are Ferraris. The cars that Enzo built are in many respects a market unto themselves, coveted by the ultra-rich for their beauty, performance, and the very status they confer. Ferrari can claim the world’s most valuable car, the 250 GTO – and has at times dominated the international auction scene as thoroughly as it dominated Formula 1 in the Michael Schumacher era.
Yet even at these lofty heights, Ferraris are not immune to the factors affecting other enthusiast vehicles. As we wind down 2021, some notable numbers from the Ferrari market this year show how they are and aren’t just like any other cars.

The sale price of the only Ferrari to sell at auction for eight figures this year, which is the 1959 Ferrari 250 California LWB Spider, sold by Gooding & Company at Pebble Beach. The lone eight-figure Ferrari sale is down from the record eight sold in 2015, but none sold for more than $10 million in 2019 or in 2020.

The share of Boomers (1946–1964) versus Gen X (1965–1981) who have called us for insurance quotes on Ferraris since the beginning of 2020.
That represents a huge surge in interest from Gen Xers, who are gradually supplanting their older siblings as the prime movers in the classic car market.
Note, however, that quotes are different than policies – the former represents interest, the latter ownership. Policies show that Boomers still have the majority of the cars, with a 53/33 split.

The average premium for which $1 million-plus Ferraris sold at auction this year relative to their condition-appropriate value in the Hagerty Price Guide.
Most of the sparks in the pandemic-era classic-car market have been in the more attainable, more modern segments – think Nissan Skyline GT-Rs and the like.
We’ve even wondered whether the ultra rich are sitting out the latest surge in the classic car market.
The fact that million-dollar Ferraris are seeing such active bidding indicates top collectors are indeed joining the Ferrari market frenzy.

As Ferrari values have risen, we’ve seen appreciation for ever-more-recent models, most dramatically the 1987–92 F40, but also for much newer cars like (stick-shift) 1996–2006 575 Maranellos.
It thus bears mentioning that Ferraris do depreciate.
The typical three-year percentage depreciation for a 488 Spider from new – 18 percent – is less than that of competitors like the V-12-powered Aston Martin DB11 Volante (21 percent) but more than that of the Ferrari Portofino (9 percent) and Lamborghini Huraca n Spyder (15 percent).

The percentage of people calling us for policy quotes on Ferraris who are inquiring about a 2010–16 Ferrari 458. That makes it the most popular Ferrari, followed by the 488, with 11 percent, and the F430, with 10 percent.
The most popular Enzo-era car is the Dino 246, at 1 percent of our quotes. This largely reflects how much Ferrari has scaled up production in recent years.

The average percentage premium in the Hagerty Price Guide for an open-gate transmission when compared to its F1-equipped equivalent. The average includes the F355, 360 Modena, F430, 612 Scaglietti, 575M Maranello, and 599 GTB.
With Ferrari continuing to expand into new product lines and likely expand into electric vehicles, demand will remain strong for the models that built Ferrari into the most sought-after car maker in the world today.
The generational shift from Boomers to Gen Xers is happening with this generation representing the largest share of quotes. However, with the Gen X share of quotes for Enzo-era cars only about a quarter, the demand for vintage cars is uncertain.