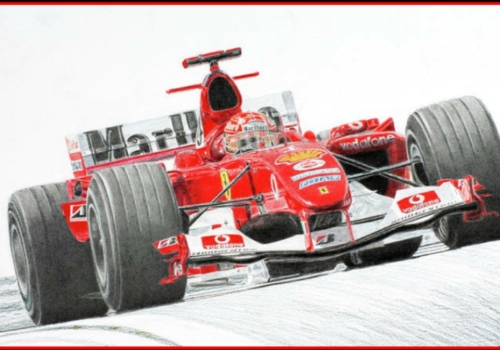 Newsletter 33: THE CAR THAT SHOCKED FERRARI

This week I thought we would take a trip down memory lane and have a look at the F2004, what with the new Formula 1 rules set to impact next year’s championship, we ask the question, “Can Ferrari return to the winning form of the ‘Schumi’ era.”

Ferrari’s F2003 GA often gets forgotten among the great cars Michael Schumacher drove while dominating Formula One in the early 2000s.
Sitting between the dominant 2002 and 2004 cars, the O3 machine made heavy weather of a title fight that boiled down to a showdown with the McLaren of Kimi Raikkonen, which was effectively a year old car.
That served as a wake-up call to Ferrari, and the following years F2004 was one of the greatest F1 cars of all time; but when it first hit the track, even Ferrari couldn’t believe what they were seeing.

After shaking the car down at Fiorano, Ferrari took the F2004 to Imola where it could be tested back to back against it’s predecessor. The team simulations, admittedly not as sophisticated as they are today, suggested the new car should be half a second faster, but Schumacher was already lapping 2 seconds quicker.
Rather than patting themselves on the back for the car being so fast, Ferraris engineers were convinced something was wrong.
The first assumption was that the car was under weight, presumably because the mechanics had forgotten to put the ballast in.
Once that was ruled out, Ferrari began a 12-hour investigation into what could possibly have gone wrong to cause such a big gap between the two cars. – While this was going on, a beaming Schumacher was insistent that the pace was real and the F2004 was just that good!

More back-to-back tests with the 2003 car were arranged for the following day, as Ferrari tried to outsmart itself to work out what was going on. But all those tests showed was that on long runs, the car was even better.
When Rubens Barrichello tested the car for the first time at Mugello, Ferrari remained convinced something must be up. The Brazilian remembers the team even wondering if there was a problem with the timing equipment, – but like Schumacher, he knew the speed was real. He says the F2004 was the only car that ever allowed him to take the Mugello’s fearsome Arrabiata corners flat-out.

So what made the F2004 so great? – Rob Smedley who was head of test engineering at the time, believes it was the first car designed around modern era F1 engineering, using new wind tunnel techniques, with Ferrari focusing on one particular area of the corner where it wanted to extract the most performance.
Designer Rory Byrne is credited with being a superb big-picture thinker, – he was good at identifying the areas worth the most effort, while being willing to spend less time on other parts of the car.
Aldo Costa who went on to enjoy phenomenal success with Mercedes in recent years, was tasked with focusing on the finer details of Byrne’s ideas.
The focus of the 2004 design was to lower the centre of gravity and improve weight distribution, and the bodywork, radiators and exhaust were redesigned to improve air flow to the rear of the car.
Costa believes the F2004 was the result of a big effort from Ferrari to understand more about tyre behaviour, working on suspension, car set-up, aerodynamics and vehicle dynamics, to get the most out of the tyres.

By this point Ferrari was the only top team still running Bridgestone tyres, and it forged a formidable relationship with the Japanese company.
Ferrari pushed for Bridgestone to constantly evolve its tyres to suit the team’s needs, and to deliver changes quicker than it had in the past.
With only Sauber, plus back markers Jordan and Minardi, also running Bridgestone’s, Ferrari effectively became the company’s sole focus.

Once it knew the F2004’s pace was real, Ferrari could have rested on its laurels, and some members of the team at the time, admit that was discussed. But under the leadership of Jean Todt, total domination was demanded.
Smedley recalls team members hanging their heads in shame in front of Todt on a Monday morning at Maranello, after Ferrari came home from a Grand Prix with something other than a one-two, even though both championships had already been wrapped up by the team, before the season end.

Ferrari’s cause that year was helped by its two biggest rivals from 2003, McLaren and Williams, dropping the ball with their radical designs for ’04, and it was only once the championship fight was over, that those two teams had reworked their cars and turned them into race winners.
The Ferrari Schumacher bubble burst the following year, with rule changes for 2005 banning in-race tyre changes. Ferrari and Bridgestone were caught out by the move, which Ross Brawn believes to this day, was designed to bring an end to their success.
Ferrari didn’t win a proper race all season, with Schumacher winning the embarrassing six car US GP, as Fernando Alonso and Renault brought an end to Ferrari’s five years of, up to then, unprecedented dominance.

With the new rule changes for 2022, we can only hope that the Scuderia will return to the winning ways of the “Dream Team” era.
All will be revealed in the new season.
In the meantime, with all development switched to the new car, we can only hope that Charles and Carlos can capitalise on all the opportunities that might come their way for the rest of this season.