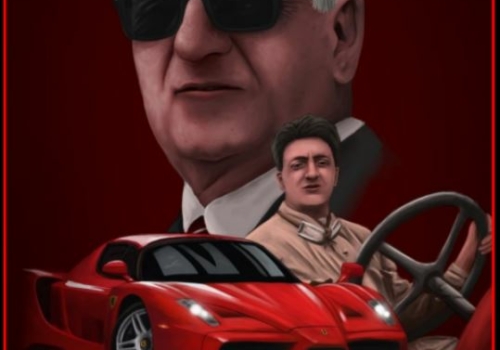 Newsletter 21: THANK YOU ENZO…….. FOR PISSING PEOPLE OFF!!

Enzo Ferrari was a man not to be crossed. He was a tyrant, an autocrat, he knew how to charm, and he knew how to influence. He ran his company with an iron fist and through his dogged work ethic and ruthlessness with his staff, built the world’s greatest and most successful Formula 1 team, and created a dynasty of road-going sports and GT cars that defined the parameters for all exotic and supercars.
No wonder then that his arrogance, determination, and ability to manipulate those around him, would inevitability result in pissing a few people off along the way.
The price of success was a high rate of attrition among his staff, ex-staff, annoyed customers, other owners, and a long list of would-be rivals, who were either envious of his success or simply out for revenge.
Here we explore a few of those individuals who, if it wasn’t for mean old Mr. Ferrari, would have meant we would all have missed out on some spectacular creations.

This car is perhaps the most famous “Ferrari-beater” of all.
The story goes that Ferruccio Lamborghini, a wealthy maker of tractors and heating equipment, visited Enzo one day to suggest a modification he had made to his personal Ferrari road car to improve the clutch.
He was treated with utter contempt by Enzo, and one can only imagine the brutal exchange as Ferruccio was shown the door.
Mr. Lamborghini decided, virtually on the spot, that he was going to take revenge on Enzo by building the ‘best GT car in the world.’
He assembled a talented young team, including ex-Ferrari engineers Giotto Bizzarrini and Giampaolo Dallara, and set about creating a front-engined two-seater, powered by a four-cam 3.5-liter V12 engine that was probably the best of its kind; certainly, the chassis was well in advance of what Ferrari was offering his road car customers.
The Lamborghini 350GTV was first seen at Turin in 1963, although the true production 350GT’s did not become available until 1964.
Meanwhile, a modern new factory had been erected to build the cars, and the myth of Lamborghini was underway.
Connoisseurs recognised the excellence of those first Lamborghini’s, but only with the introduction of the ground-breaking mid-engined Miura, did Lamborghini build road cars that challenged – and even exceeded – the mystique of Ferrari.

Henry Ford II was set to buy Ferrari in the early ’60s, but was jilted at the last minute when he and Enzo fell out over the Italians’ rights to race at Indianapolis.
When Enzo walked away, a furious Mr. Ford sanctioned his competition department to find a company who could build a car for Ford that would beat all-comers in endurance racing, particularly the Le Mans 24 Hours, and even more particularly the Ferrari’s.
They found a ready-made basis for a winner in Eric Broadley’s Lola GT, which had showed potential at Le Mans already, and conveniently used a mid-mounted Ford V8.
Former Aston Martin Competition Manager John Wyer, was hired to develop the car into a winner, that would triumph at Le Mans in 1966, ’67, ’68 and ’69, including the famous 1-2-3 finish in ’66.

John DeLorean and his lieutenants at Pontiac conceived the GTO package as a way of livening up the staid image of this GM division, rather than as a means of attacking Ferrari; but they must have felt smug about the furor their brainchild caused.
There were no real Pontiac racing connections, as competition involvement had been banned at GM, making DeLorean’s use of the Gran Turismo Omologato nomenclature even more of nonsense on what was essentially a very ordinary mid-range car.
But the 1964 Pontiac GTO was the birth of the muscle car, inspiring dozens of imitators and notching up peak sales of 96,000 units in 1966 alone.
Soon, the ‘GOAT’ became an American cultural phenomena of the ’60s, second only to the Mustang.
Any American with $2,000 or so to spend could own a car that would leave a $14,000 Ferrari standing in a straight line.
Those Ferrari-lovers who were already outraged at Pontiac’s use of the hallowed GTO symbolism must have suffered near thrombosis when Car and Driver magazine ran a story comparing a Pontiac with a Ferrari 330GT and declared the match a draw……..

Having rescued both marques from oblivion after WW2, the patriotic engineering tycoon David Brown was as passionate about the Lagonda marque as he was Aston Martin.
He had fond memories of the pre-war V12 Lagonda’s, and wanted to build a successor for the 1950s that would challenge the big 4-liter V12 Ferraris’ dominance at Le Mans: a Lagonda had, after all, won the 24 Hour endurance classic in 1935.
The Lagonda DP115 ran at Le Mans in 1954 as part of a particularly disastrous works entry, retiring after a spin crumpled the shapely Frank Feeley-designed bodywork.
Still, a timed 172mph down the Mulsanne straight showed the potential, and an improved car was fielded in 1955. The car retired on lap 93, causing Brown to cut his losses and park his dreams of a British Ferrari-beating V12.
But it didn’t end there…… we all know the story of how David Brown built the Aston Martin company into the world-class manufacturer it is today, despite going bankrupt a thousand times and changing owners just as often!

What would have transpired if Enzo Ferrari had been an easy-going, mild-mannered gentleman?
We may not have been gifted with the icon that is the Ferrari brand, and we certainly would not have been privileged to have experienced the likes of Lamborghini, Ford, and, to a certain extent, Aston Martin.
So Bravo Mr. Ferrari ……. and thank you for pissing off so many people and inspiring them to go on to bigger and better things!

If you enjoyed reading about Enzo you will probably love reading our article about the forgotten Ferraris.