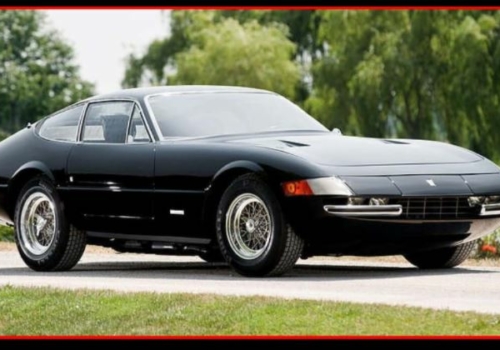 The Daytona name is officially unofficial. Supposedly the name was dubbed by the media rather than Ferrari, apparently to commemorate Ferrari’s 1-2-3 finish in the 1967, 24 Hours of Daytona.

Ferrari rarely refers to the 365 as the “Daytona,” and regards it as an “unofficial” title.

In general, the accepted number of Daytona’s produced by the factory varies, depending on the source, but is widely accepted to be just over 1,400, over the entire production life. This figure includes only 156 right-hand drive coupe s, 7 right-hand drive spiders, and 15 competition cars. The competition cars are divided into three series, all with modified lightweight bodies and in various degrees of engine tune. All Daytona bodies, except the first Pininfarina prototype, were produced by Italian coach-builder Scaglietti, a name synonymous with Ferrari for a number of decades.

Pininfarina designer Leonardo Fioravanti, who had previously worked on the Dino Ferrari’s styling, was responsible for the 365 GTB/4.
It reflected a movement from Ferrari’s traditional rounded designs to a more contemporary, sharp-edged look.
Early Daytona’s featured fixed headlights behind an acrylic glass cover, however, new U.S. safety regulations banning headlights behind covers resulted in retractable pop-up twin headlights from 1971.

In 1971, a Daytona was driven by Dan Gurney and Brock Yates in the inaugural Cannonball Baker Sea-To-Shining-Sea Memorial Trophy Dash.
The pair won with an average speed of 80.1 miles per hour (129 km/h), completing the drive from New York City to L.A., a distance of 2,876 miles (4,628 km), in 35 hours 54 minutes. Gurney was later quoted as saying, “We never once exceeded 175 miles per hour.”
In 2004, the Daytona was voted top sports car of the 1970’s by Sports Car International magazine. Similarly, Motor Trend Classic named the 365 GTB/4 and GTS/4 as number two in their list of the ten, “Greatest Ferraris of all time”.