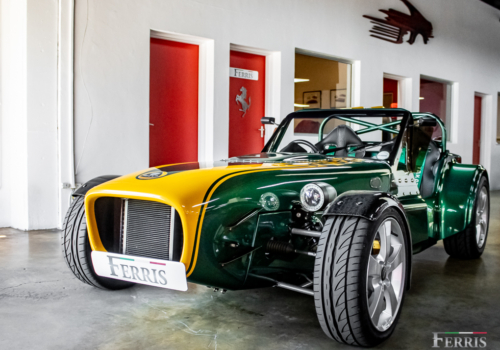 Newsletter 18: AND NOW FOR SOMETHING COMPLETELY DIFFERENT!

This is a Millennium 7, a South African designed and built a kit car that defies all you know about kit cars. Whilst you may be forgiven for thinking it’s a Lotus 7, it’s not. Yes, okay it does look like a Lotus  7 and you could use terms like “A Tribute to,” “A Nod To,” etc…. but this is a completely different animal.

In true South African style, aeronautical engineers, Chris Carstens and Cobus van der Walt of SAA Technical, on the request of a  friend, set out to design and build a bespoke track-focused, but road legal, vehicle.

They have produced numerous versions of this compact little  missile, all of them made to client specs, all of them light, quick, and constructed with the finest materials, but none of them  compare to the “Dragon Slayer.”

Of the 40 cars produced, this incarnation is, by far the most extreme produced to date.

The standard offering of the power unit was the 2.0-liter Ford Duratec coupled to a Ford Type 9 gearbox. The Dragon Slayer Millennium 7 has been fitted with a turbocharged version of the 1.6-liter Renesis rotary engine seen on the Mazda RX-8.

The “Slayer” is fitted with a carbon clutch,  BMW E30 3-Series rear differential, driveshafts, brakes and callipers. The windscreen is toughened glass, set at a 55-degree  rake, and the car has an overall weight of just 700kg’s (1543lbs), due to the space frame chassis, aluminium skin panels, and fibreglass body.

Millennium 7 were lucky enough to get Alistair Gibson, former South African-born chief mechanic for the Honda F1 program, so you know it’s had some serious eyes on design and production. Let’s consider the facts!

The car weighs in at about the same as a Venter trailer full of Castle Light, the build process was consulted on by a Formula 1 mechanic and, get this……… the motor puts out 700 horse-power (currently detuned to about 400).

This thing is insane! – Zero to 100 is about 5 minutes ago. At full tilt, your face will look like a bulldog chewing a wasp. This is the best fun you can have with your pants on!

There’s not even a handful of this version of the Millennium 7 in existence, so they rarely come on to the market,

WE HAVE ONE FOR SALE!

OODLES OF FUN FOR