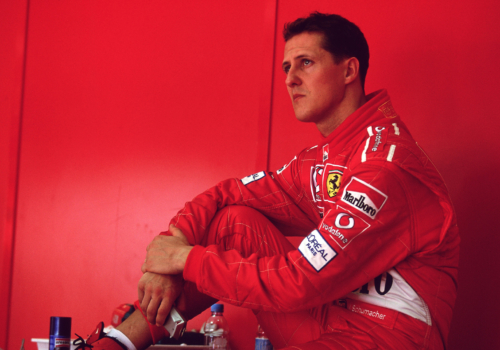 Netflix is set to release a new documentary about the Formula 1 legend, Michael Schumacher.
This long-awaited film, to be aired on September 15th, tells the story of the German F1 legend’s career, from karting in Kerpen to taking his record seventh championship in 2004, with interviews from his wife Corinna, their two children Gina and Mick, and many former F1 rivals and peers.
“Schumacher” promises unseen archive material showing the “many facets of his multi-layered personality.” His brother Ralf, former Ferrari boss Luca di Montezemolo, FIA chief Jean Todt, former F1 boss Bernie Ecclestone are featured along with F1 drivers, Mika Hakkinen, Sebastian Vettel, and David Coulthard.

I met Michael in 2007, at Fiorano. It was at the companies 60th Anniversary party. I gave him a DVD I had made of all his championship wins, to the sound track of AC/DC’s Thunderstruck.
As we walked into the venue together, we were greeted by a sea of paparazzi, something Michael was all too familiar with, but for me it was a little unnerving!
A few weeks later, I received an email from Michael, thanking me for the DVD and asking me to keep in touch. We did keep in touch periodically, almost right up to that fateful day in 2013.

Don’t miss what will be an extraordinary insight into the life and character of one of F1’s greatest ever drivers!