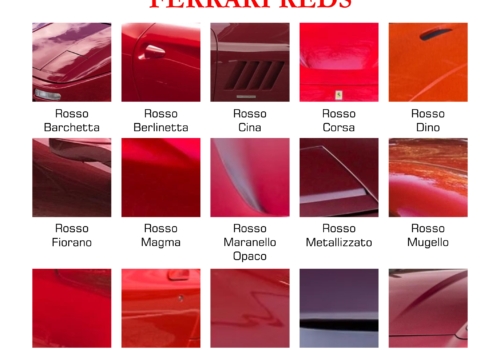 By Dominique MunroFebruary 24, 2021No Comments

Article by: THE OFFICIAL FERRARI MAGAZINE

Both the very first Prancing Horse car, the 125 S, and the 125 F1 which took to the track in the Monaco Grand Prix on 21 May 1950, were a burgundy colour. This dark red hue was the official colour of all Italian racing cars from the beginning of the 20th century – and in fact, the two Scuderia Ferrari SF1000s that contested our 1000th Formula 1 Grand Prix in 2020 sported a special colour that was a faithful reproduction of those early cars.

After sponsor-inspired liveries were introduced to Formula 1 in the 1960s, Ferrari remained the only constructor to stick with tradition and continue to clothe its single-seaters exclusively in the classic red. Consequently, our road cars were identified with that colour thereafter.

Red was seen as the almost obligatory colour choice for clients, with 85% of all Ferraris built in the early 1990s sporting red liveries. That dynamic has now changed, as clients choose from a vast range of colours. Nonetheless, traditional red continues to predominate for around half of client orders, be it from Ferrari’s customary palette, or as unique colours created with the Tailor-Made programme.

Today, nine distinct red hues are available to clients through Ferrari’s configurator before they explore creating their own unique paint. Together, these colours, with their history and evolution, have become signatures of the Prancing Horse’s road and competition models.

Most famous and most popular is Rosso Corsa, often seen as the identifying colour of a Ferrari. It has even been fired into space, in a specially constructed capsule aboard the European Space Agency’s 2003 Mars Express Mission to the Red Planet (after undergoing a series of rigorous mechanical and thermal tests to ensure it would withstand the extreme conditions encountered, of course).

Rosso Corsa is a pastel red, defined and lively, while closely related but a lighter shade is Rosso Scuderia, an historic colour used by our Formula 1 team. Equally entrenched in our past is Rosso Dino, the launch colour of the Dino 206 GT and one which hints
toward the orange side of red.

Contemporary developments offer the client an expanded choice, and have often been launched in collaboration with a new Ferrari model. Rosso California and Rosso Portofino, for instance, are complex metallics, and belong to this new generation of colours.

Progress allows our historical shades to develop, too. Rosso Corsa Met, launched with the 488 GTB in 2015, represents an alternative to Rosso Corsa, with a delicate metallic tint becoming perceptible with lighting. Created to celebrate Ferrari’s 70th birthday in 2017, Rosso 70 Anni was first seen on the 812 Superfast and showcases a pastel colour with strong depth to link indelibly to our past.

Here are a few explanations of some shades of Ferrari red:

• Rosso Barchetta: Means “Small Boat”, comes from the shape of the early racing cars.
• Rosso Berlinetta: Specifically developed for the F12 Berlinetta.
• Rosso Cina: A non-metallic colour used by Ferrari in the 1960s.
• Rosso Corsa: The most common shade used. The official national colour of Italy.
• Rosso Dino: Introduced in the 1960s and again in 2002, part of the historical range.
• Rosso Fiorano: Named after the historic factory test and race track.
• Rosso Magma: Originally a Maserati colour, introduced by Ferrari for the 488 Pista.
• Rosso Maranello Opaco: From the Italian word “Matte”, has a slight sparkle.
• Rosso Metallizzato: One of the darkest hues with a hint of purple.
• Rosso Mugello: Named after the race circuit Autodromo Internazionale del Mugello.
• Rosso Portofino: Introduced together with the Ferrari Portofino in 2017.
• Rosso Scuderia: Named after the Ferrari Formula 1 team, used from 2003 to 2007.
• Rosso Singapore: Tailor Made For SG50, for the 50th anniversary of Singapore.
• Rosso Vinaccia: Translates to ‘red wine’, inspired from winemaking.
• Rubino Micalizzato: The darkest shade of red, only available on request.