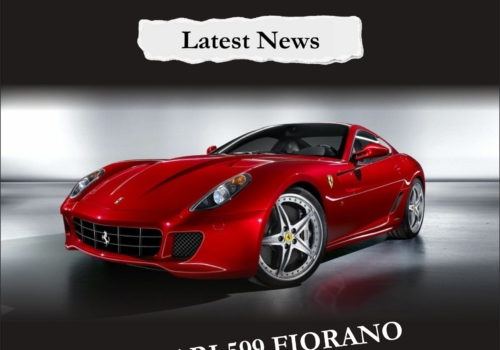 Replacing the 575 Maranello in 2006, the Ferrari 599 GTB Fiorano was the new flagship of the famous Italian brand. Named after Ferrari’s own test track, the 599 is a high-performance Gran Turismo with a V12 up-front, and rear-wheel drive.
A pure product from Maranello, the 5,999 cm³, V12 is capable of taking the car up to speeds of 330 km/h and go from 0 to 100 km/h in only 3.7 seconds.
If you think about it, back then in 2006, this was ballistically fast (and it still is). Just to put things into perspective, the Ferrari Enzo went from standstill to 100 km/h in 3.6 seconds. The 599’s engine is actually derived from the Enzo and was later used for the track-only 599XX.
The engine is so pushed back that you can actually call it mid-front position. Finally, it can rev up to 8400 rpm, and you can only just imagine the noise it makes when it reaches these speeds.

The design of the 599 is quite a controversial subject.
While some think the 599 GTB Fiorano looks a bit chunky, and with a behind that is up to Kardashian standards, many think that it’s one of the most beautiful modern designs to come out of Maranello. Designed by Frank Stephenson under the watchful eye of Pininfarina, it looks totally different from its predecessor, the 575 Maranello.
For the first time, the car was equipped with only one round tail light on each side, and this was weird because we were always used to having the signature circular quad rear lights.
The 599 was designed to deliver the greatest amount of downforce, a consequence of which is the very distinctive arches on the back, probably the coolest feature on the body.

There was a choice between a (very rare) six-speed manual or the automatic, called the “F1 Superfast gearbox”. Most customers opted for the automatic one. It was quite an innovation back in those days.
Ferrari promised smooth and near F1 fast-like gear shifts. Sadly not the case, although it was a giant leap from the one found in the 575, it was not a double-clutch box, so by today’s standards, the car falls a bit behind the competition. Only 10 manual versions were ever produced, and it’s the final Ferrari V12 that came with a “proper” gear stick.

What is a Gran Turismo without a great interior?
The now-signature start button on the steering wheel was brand new and it was cool to finally see the Manettino on a V12 GT.
There are inspirations from the Formula 1 world, like carbon fibre bits and pieces, or the optional LED rev display on the steering wheel, that help you shift like Michael Schumacher.
Of course, the seats are beautiful and comfortable, and you have all the comfort you need. This isn’t an Enzo, so you have a radio, satnav and leather everywhere, etc.
It really is a car you don’t mind doing many miles in.

The Ferrari 599 GTB Fiorano had many variants, and we’re not talking about the various Mansory or Novitec Rosso editions.
Ferrari built a few exclusive and limited edition models based on the 599 GTB. The first limited-edition car that the brand released was the GTO. Iconic name for an iconic car. Only 599 units produced and it is a car that, like the F12 TDF, is faster, lighter and even more sporty than before.
Then came the real deal, as mentioned above, the 599 had a track car variant called the XX. Something crazy, from another world that was then followed by an even crazier Evoluzione.
Back to road cars, the open top SA Aperta, the one-offs P540 Superfast Aperta, Superamerica 45 and SP30, were all derivatives of the 599.
The 599 GTB is such a blast. It’s a true Ferrari Gran Turismo capable of blistering performances.
The 599 was such an achievement back in the day, that you had to love it.
Talking about investment, just think about the fact that this is one of the last naturally-aspirated V12 engine’s from the brand.
Could it be worth much more money in the future? ………….. It just might surprise us!

We are very fortunate to have just acquired this
2009 FERRARI 599 GTB FIORANO
With only 34,000 km’s, Full Service History, all books, spare keys, car cover, tools, jack and spare wheel.

Get in Touch
Scroll to top
This website uses cookies to improve your experience. We'll assume you're ok with this, but you can opt-out if you wish. Cookie SettingsAccept
Manage consent