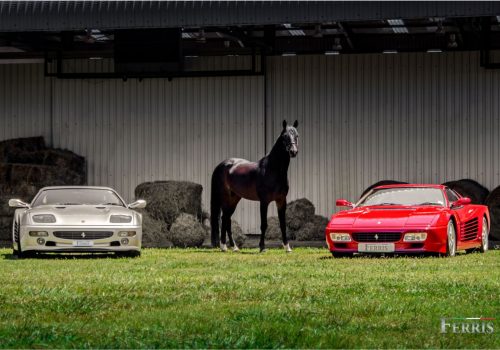 This week we bring you another “First for Ferris” thing.

Never before have a Testarossa, a 512TR, and a 512M been photographed together in SA, and in true Ferris style, we decided to do it with the mother of all brand ambassadors, a Cavallino Rampante!

The Testarossa bloodline started with the 365 GT/4 BB, first released for sale in 1973 at the Paris Motor Show, followed in 1976 by the updated BB512, resurrecting the name of the earlier Ferrari 512 racer.

In 1984 the Berlinetta Boxer layout was totally revamped, restyled and reproduced in the guise of the Testarossa.

Built to compete with the Lamborghini Countach, the Testarossa was superior in performance, drivability, comfort, and reliability.

The Countach is the kind of car Darth Vader would drive whilst control the evil empire in Star Wars, if he could fit in it that is. The Testarossa, however, was the car Sonny Crocket drove whilst chasing down drug dealers in Miami Vice.

Which one was cooler?… If you are 12, your answer would be Darth, but your not, because you are all grown up now and you appreciate superior build quality, class, comfort, aerodynamics, and most of all… Air conditioning!

The Testarossa was a car designed and built to cash in on an image, and since cashing in was what the Eighties were all about, it was the perfect vehicle for its time.

The Testarossa got a facelift and upgrade in the form of the 512TR in 1991.

The 512TR’s engine was extensively reworked. Nikasil liners were added, along with a new air intake system, Bosch engine management system,  larger intake valves, and a revised exhaust system. In addition to the higher peak power, the modifications delivered a broader powerband for better acceleration.

The final iteration in the Testarossa family was the 512M. Unlike the 512TR, the change was quite radicle. The front and rear lamps received a design change, the pop-up headlamps were replaced by two fixed square units, the rear tail lamps were round and the bumpers had been restyled to yield a  more unified look. The car also featured a different front lid with twin NACA  ducts.

The F512M’s interior received only a minor update from the 512TR. The gearshift knob had a chromed finish, the aluminum pedals were drilled, and air conditioning was now included as standard.

Pininfarina and Ferrari flags, a common sight on later Ferrari models, lined  the dash board.

The Testarossa and its proceeding siblings were Ferrari’s boldest statements in the ’80s and ’90s, all of which are true collectibles now, and the chance to acquire a good one will surely be a solid investment going forward.