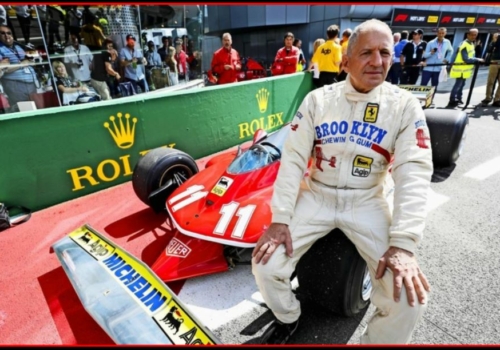 Scheckter is probably the most famous name in South African motorsport.
It’s also pretty well known internationally, due obviously, to Jody winning the Formula 1 World Championship, but also the contributions made by the other members of this motor racing dynasty.

Jody Scheckter is, so far, the one and only South African Formula 1 champion.

Born on the 29th of January 1950 in East London, his motorsport journey began due to his family ties with cars. His father had a Renault dealership in which he worked and had his first taste behind the wheel. After trying bikes, cars came in and became the option for the South African speedster.
Jody won the South African Formula Ford Series at age 20. This earned him a trip to England and a taste of the European categories.
His speed gave him the chance to make his Formula 1 debut in the last race of 1972, with McLaren. He qualified eighth for the United States Grand Prix, in the Ford-powered M19A, and finished ninth. Though he was fast, his driving skills were a little erratic and earned him the nickname, “Sideways Scheckter.”
In 1973, he won the SCCA L&M Championship, an American Sports Car Championship. Subsequently, McLaren gave him more shots at Formula 1 events, but his participation proved to be tumultuous.
He qualified third for his home race, the 1973 South African Grand Prix, in just his second F1 start. However, engine troubles left him in only ninth place.
Jody moved to Ferrari in 1979. After his first winless year since 1973, Scheckter took the Ferrari 312T4 and made the best of it.
The Flat 12 engine was efficient, the Ground Effect on the car was on point and Jody had the experience to compete for the main goal, the championship. After two tough South American rounds in Argentina and Brazil, Ferrari soon became the team to beat. Consecutive 1-2 finishes in South Africa and the US Grand Prix West, both led by Gilles Villeneuve, meant Ferrari was on course for the title.
At the Italian Grand Prix, Scheckter led a 1-2 for Ferrari which sealed both the Drivers’ title for him and the Constructors’ Championship for the team. Villeneuve and Scheckter had a cordial season and the race at Italy finished off a perfect season for Ferrari.
Sadly Jody retired from Formula 1 in 1980 having achieved the championship, he had nothing else to prove and was ready to enter other sorts of competitions: the business world. He had tremendous success in business in his post-racing life.

Scheckter’s title in 1979 was the last for a Ferrari driver until Michael Schumacher’s first championship with the team in 2000.

Ian is the elder brother of F1 World champion Jody.
Ian also raced in the Formula 1 World Championship, recording 20 entries, between 1974 and 1977.
Ian was very successful in his home country, taking Formula Atlantic South African Championship titles four times in a row from 1976 to 1979, and then again in 1983 and 1984.
He’s one of three six-time champions in the South African premier open-wheel competition, along with John Love and Dave Charlton.
Ian made his debut in the South African Formula 1 Championship in 1973, for Team Gunston. In his rookie season, he was on the podium twice, finishing fourth in the points. He also made few starts in sports car races in a Chevron B26-Cosworth, sharing a car with John Watson. They retired at Kyalami 9 Hours and won the Cape Town round of the South African Springbok Trophy Series.
In March 1974, Ian made his debut in the Formula 1 World Championship with Team Gunston.

In 1974, Ian finished second in the South African F1 Championship, scoring five wins, one victory less than champion Dave Charlton.
1975 saw Ian again come runner up to Dave Charlton who captured his sixth championship trophy.
In March 1974, Ian made his debut in the Formula 1 World Championship with Team Gunston. Starting 22nd on the grid, he finished 13th, two laps behind race winner Carlos Reutemann in a Brabham.
In the 1975 Formula 1 World Championship season, Ian competed for Lexington Racing.
Later in the season, he joined Williams Racing for two events – Swedish Grand Prix and Dutch Grand Prix. He retired at Scandinavian Raceway and finished 12th at Zandvoort.
In 1976, the South African Formula 1 Championship was dismissed and the Formula Atlantic became the national premier series. Ian scored six wins and took his first championship title, stopping the reign of Dave Charlton.
Following his fourth championship-winning season in the Formula Atlantic in 1979, Ian returned in 1983 with Team Gunston. He won thirteen races and captured his fifth title. A year later, he won eleven races to take his sixth title.

Thomas was born in Monte Carlo to Jody and then-wife Pamela.
He started racing karts in South Africa at the age of 11 and it did not take long for the young driver to reach the podium. He had his first taste of a major championship as a teenager when he captured the South African Kart Championship in 1995. In 1996 he ventured on to the main circuit in the South African Formula Vee series and soon after he was in the South African Formula Ford Series where he posted two wins.
He had proven his speed in South African motorsports and was then off to Europe the following year where he entered the British Formula Vauxhall Junior series.
Thomas earned third in the championship with one victory and one pole. He was also named series “Rookie of the Year.”
In 1999, Thomas won the Formula Opel Euroseries Championship with a record eight victories and eight poles, and in the process broke all the winning records previously set by Mika Ha kkinen, Rubens Barrichello, and David Coulthard. That success landed him a drive that same year in the last two races of the Formula Nissan Championship which Fernando Alonso had dominated that whole season. Even though Thomas was with a new team for this brief stint in Formula Nissan, he captured a win, two poles, and a second-place position.

Thomas moved on to the Formula 3 Series in 2000, and in his rookie year, he was the runner-up in the British Formula 3 Championship with two victories and two pole positions, while contending again with drivers such as Takuma Sato, Anto nio Pizzonia, and Narain Karthikeyan. He also had time to race in the prestigious Marlboro Masters F3 race at Zandvoort where he took the third podium position.
Thomas was signed as a test/reserve driver by Jaguar for the 2001 Formula 1 season.
Thomas raced in the Indy car series from 2002, with various teams including Eddie Cheever’s Red Bull Cheever Racing, Target Ganassi Racing, Patrick Dempsey’s Vision Racing, and Dale Coyne Racing.
Thomas now works at his father Jody’s Lavestoke Organic Farm in England.

Jaki is the son of Ian and the nephew to Jody Scheckter.

Jaki is probably best known for being the nephew to South African Formula 1 World Champion Jody and son of multiple South African champion Ian, but Jaki is a South African legend in his own right, with accolades from winning the 1992 Formula Ford SA Championship, at 18 years of age to, beating Juan Pablo Montoya in the Barber Dodge Championships in the USA, in 1994.
Alas, a lack of funding inhibited Jaki from a career in the Indy Lights Series despite having secured an engine deal.
Jaki will be joining us to assist with sales and marketing, and will be integral in a venture we are launching soon ………. Watch this space!