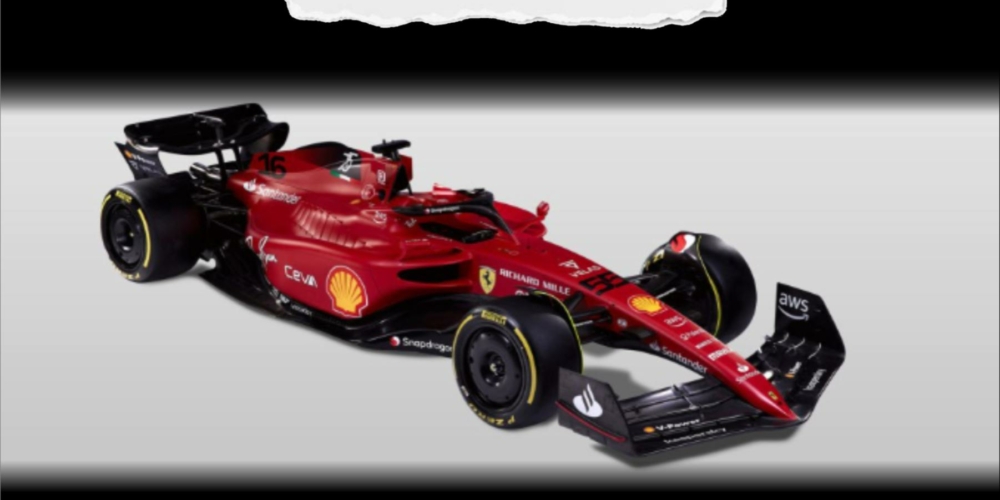 The Ferrari F1-75 was revealed on Thursday afternoon and first impressions are good………. it looks fantastic!  There was a hint, from the teamwear colours released earlier this year, that the car would have more black incorporated into the livery, and that is what has happened with the black covering the front and rear wing while the rest of the car is draped in traditional red.

The current colour scheme harks back to the type of livery the Scuderia used in the 1990’s. Since then we have seen the team go for a red and white theme and in more recent times a red and green type look, which many were not fans of.

The eagle-eyed among you will notice no “mission winnow” on the car.

This was a Philip Morris (Marlboro) initiative and, as some of you may be aware, Philip Morris ended their partnership with Ferrari at the end of last year.

The ending of this partnership would also explain the colour scheme change. Previous colour schemes were dictated by the corporate identity of Malboro, as they were the primary sponsor.

The biggest change in the new F1-75 is engine related, and there’s not too much info in the ether on that.

We do know however, that in 2021 the team made a leap forward, despite spending most of the year focusing on 2022.

The rules around the power unit are not changing this year, so, 2022 represents the final opportunity for the power unit manufacturers to make an impact in this department before an engine development freeze comes into play at the end of 2025.

Ferrari have interpreted the new rules in some very innovative ways.

Starting at the front of the car, the wing is pretty much indistinguishable from all the other teams, but that’s where the similarities end.

The centre section of the car, and in particular the side pods and the big undercut in the middle, are in stark contrast to what has been seen so far.

The genius of this design is, instead of trying to manage airflow from around the sides of the F1-75 (very turbulent), Ferrari is directing air from the from wing, into the undercut (1), the air box (2), and then through the internal valley in the side pod (3).

This means the airflow is much more manageable and should result in a much more slippery car.

The turning vanes, attached to the outer edge of the floor are designed to control the flow of wake created by the front wheels.

In addition, Ferrari has an upturned vane on the leading edge of the undercut, to direct airflow along the underside of the side pod, utilising the turning vane and keeping the flow controlled along the length of the undercut section.

The rear suspension is vastly different from recent Ferrari configurations.
The upper wishbones are a lot wider and flatter, have a much more pronounced angle and are extended further forward.
This helps with the airflow created by the side pod configuration and enables a smoother transition towards the rear wing.

The idea behind this layout is to energise the rear wing and make it perform to its maximum.

The entire objective of any race car is to make it as aerodynamic as possible.
The new rules have put much more emphasis on downforce and ground effect than has been seen since the 1970’s.
The aim is to channel the air along the car, through the various vanes, valleys and wings, and forcing it upwards at the rear, away from the cars following, thus enabling closer racing.

Ferrari have been extremely aggressive with their approach to the 2022 design and have come up with some very elegant solutions for the F1-75.
Lets hope that this will be the change that we have been hoping for!!!