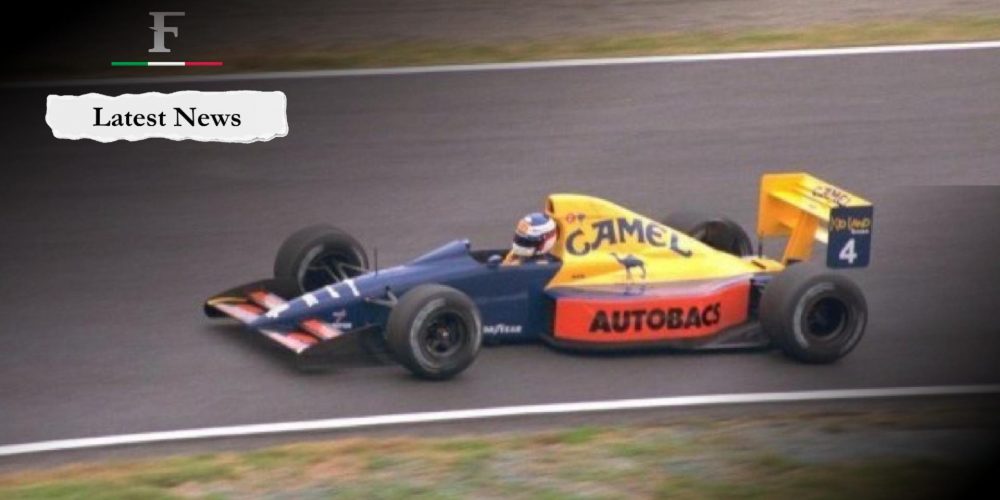 AND ENZO STEPS IN!

The semi-automatic gearbox or paddle shift, as it is also known, is one of the most significant technological developments in f1 history. In just a handful of years, after Ferrari introduced the concept in 1989, every car on the grid had copied it.

It is a system we take for granted today and it’s even made its way into the road car industry, but the pioneering car that first carried this revolution almost got derailed by spectacular internal politics at Ferrari.

The semi-automatic gearbox was the brainchild of legendary f1 design genius John Barnard, Barnard had moved to Ferrari from McLaren at the end of 1986, and in early 1987 he was getting down to work on his first design for the Ferrari team, which would eventually lead to the iconic 640 of 1989.

As f1 was reaching the end of its brutal turbo era, Barnard was one of the first technical minds to grasp the importance of creating leaner car designs, which carried the potential for huge aerodynamic gains.

Unfortunately, in his attempts to create something as sleek as the 640, he hit a huge problem. The gear shift mechanism, along with the clunky h-pattern gearboxes of the era, created a huge design headache, not only did it restrict how small the cockpit could be, because of the space required for the gear lever, but the entire linkage system compromised the design of the back end of the car.

Eventually, Barnard came up with an alternative. He initially came up with a system where the driver would press a button on the steering wheel, which would then send an electrical signal to a hydraulic actuator on the gearbox and, hey presto, the car would change gear! 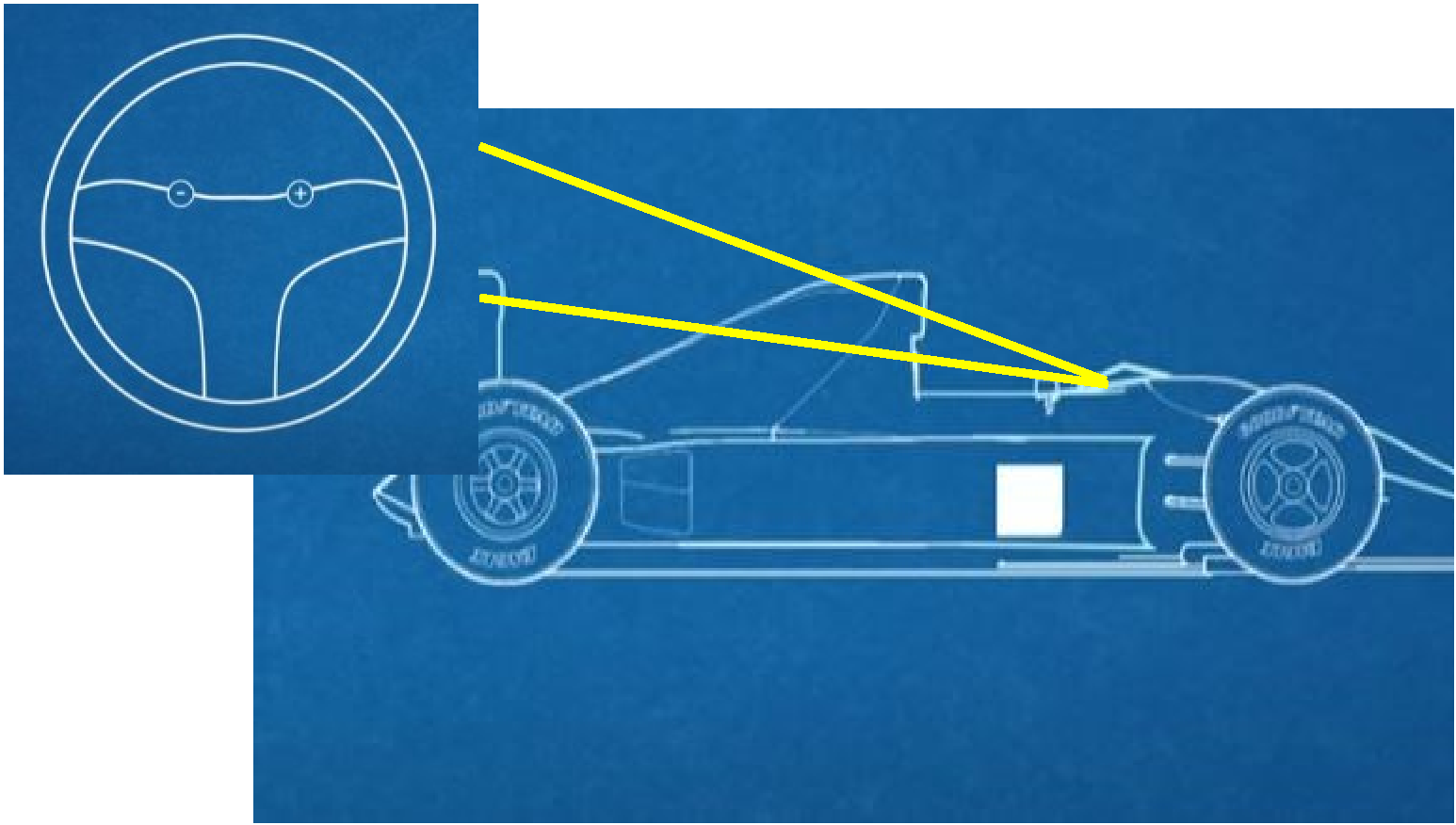 The benefits of the system would be huge, the driver would have greater control of the car because they would never need to take their hands off the wheel to change gear, and engine damage would be reduced, as the driver would no longer be able to accidentally change down at high revs or miss a gear.

Ferrari had evaluated a sequential gear shift, with a lever, almost a decade earlier with Gilles Villeneuve at Fiorano, however, back then the electronics available were not advanced enough to get the most out of the system, so it was abandoned.

You might be wondering why Ferrari started work on its 1989 car at the beginning of 1987?

What’s often forgotten is Barnard’s initial design, the unraced 639 that was originally intended to race in 1988. This was the final year that turbo engines were allowed but Ferrari had intended to make the switch to a normally aspirated v12 a year earlier, partly to get ahead on development, and partly because of concerns about how much the turbo engines were going to be held back by greater fuel capacity restrictions for 1988. Ferrari said that the car wasn’t ready because of the time needed to develop the gearbox and communication difficulties with Barnard, who was working from the UK at the time.

Barnard blamed the engine department for not having the v12 ready in time. Subsequently, Ferrari spent the final year of the turbo era racing an adapted version of its 1987 car, which was blown away by McLaren’s phenomenal mp44.

Barnard also struggled to get access to Ferrari’s wind tunnel to test out the design he was working on. Eventually, the reason for this became clear. Word leaked out, from Maranello to Barnard’s UK operation, that the wind tunnel time was being taken up by another design being led by Harvey Postlethwaite. The “secret” project was kept away from Enzo Ferrari although his son, Piero was in on it as was driver Michele Alboreto, who did not get on with Barnard.

Internal politics were nothing new at Ferrari but even by those standards, this was an incredible level of deceit.

Enzo Ferrari had hired Barnard himself, so it was a huge risk to work in the shadows, against the man Enzo had hand-picked to get Ferrari back on top. 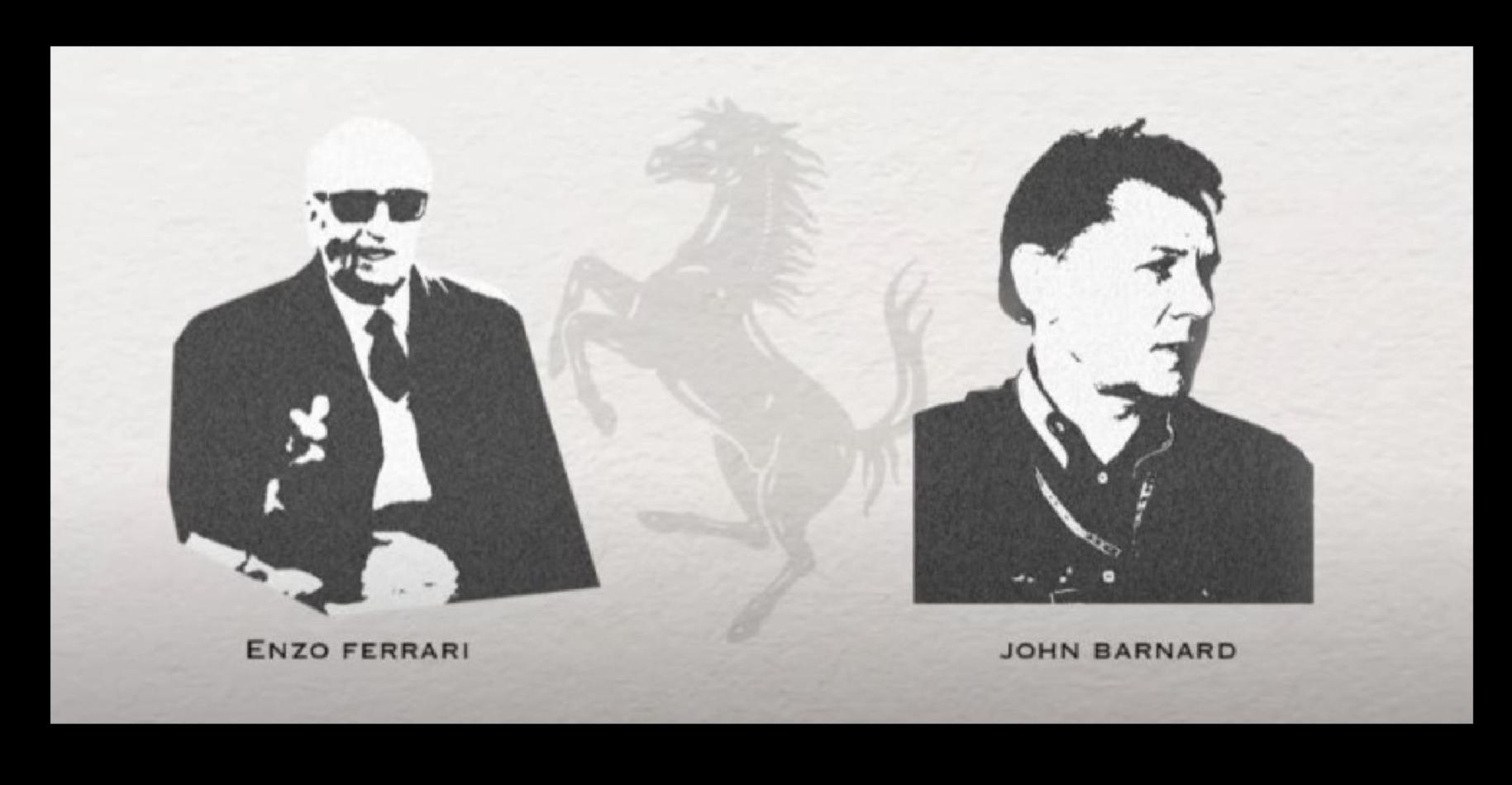 It was a sign of how keen Enzo was to support Barnard. In spite of the politics, he agreed to the British designer’s wish to set up a technical office in England rather than work full time from Maranello.

This created the conditions to allow a secret project to form out of sight but, had Barnard been working from Italy, he would have been able to keep an eye on the internal politics at Ferrari.

The “secret” car, like Barnard’s 639, was being worked on to race in 1988 and, as a further sign of the destructive forces at work inside Ferrari, the secret project was being designed around a turbo engine, so Ferrari had two cars being designed for 1988, one with a turbo and one with a normally aspirated v12. 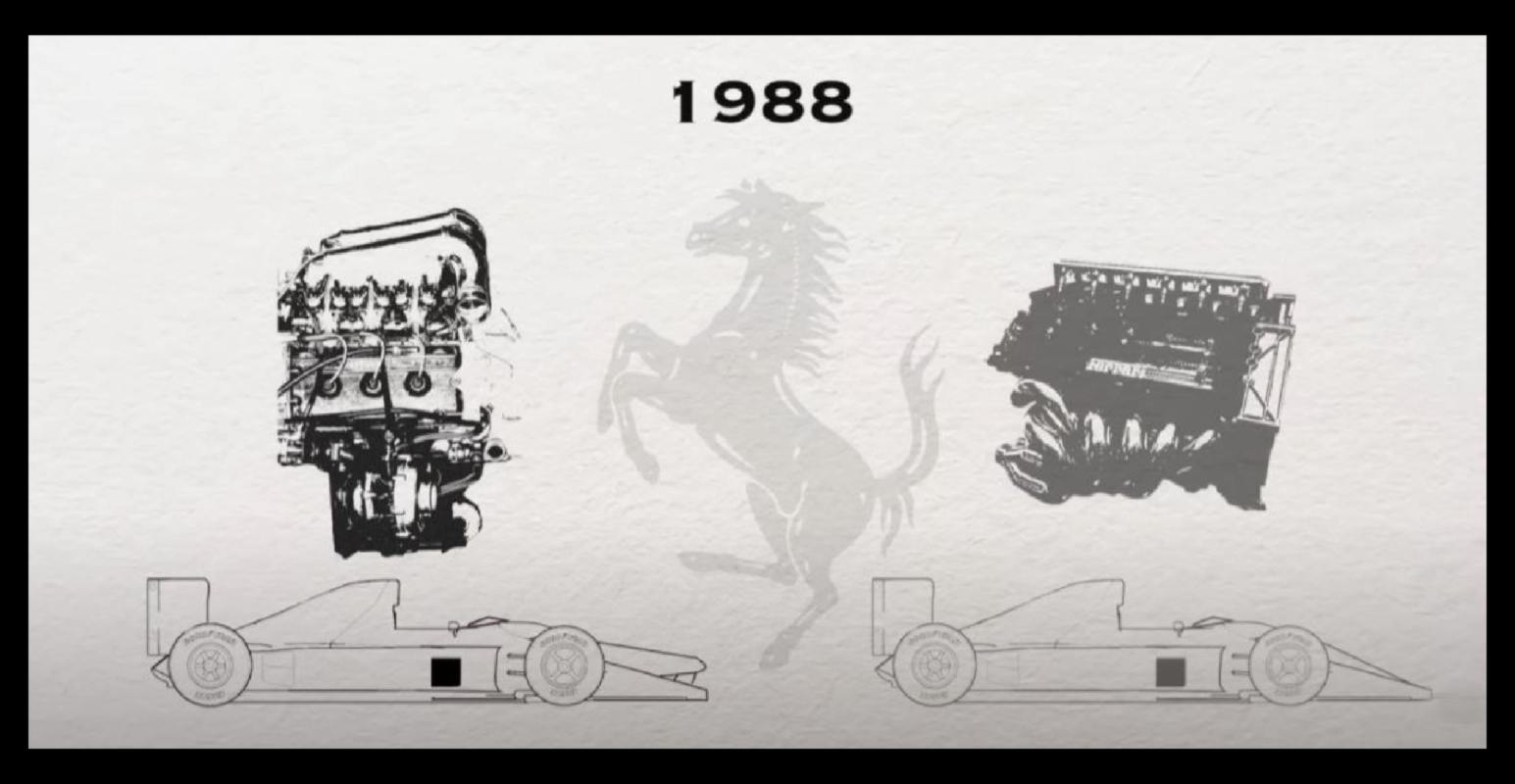 Nothing sums up how self-defeating the politics at Ferrari were in this era, better than the fact that neither car was ready in time to race.

Curiously, for a character famed for his short fuse, Barnard took no action when he learned of the secret car, instead, he waited until his design had run for the first time in May of 1988 when it was met with enthusiastic approval from an increasingly frail Enzo Ferrari.

Barnard got the last laugh though when shortly afterwards, he met with Ferrari managing director Gianni Roselli, at which point he told him about the “secret” car.

Roselli went straight to Enzo Ferrari, who took swift action against the main players in the plot. Piero Ferrari was immediately side-lined, Postlethwaite was “let go”, and subsequently went to Tyrell and Alboreto was “let go” at the end of a season full of politics.

There was more trouble to come though, following Enzo’s death in august 1988. A power struggle broke out inside Ferrari, senior figures within Fiat jockeyed for position and another parallel car project was put into action, this time it was a simpler idea, a modified version of the unrealised 639 was produced with a conventional gear shift, under the orders of those within fiat, who had doubts about Barnard’s semi-automatic concept.

After a lengthy legal dispute, senior figures had even got Barnard to agree to a new contract clause stating that, if the paddle shift system was a failure, Ferrari could switch to a conventional gear shift and release Barnard from his contract, without any form of a severance package.

That idea was quickly knocked off its course when new recruit, Nigel Mansell tested the backup design at Fiorano and immediately dismissed it in favour of Barnard’s paddle shift. 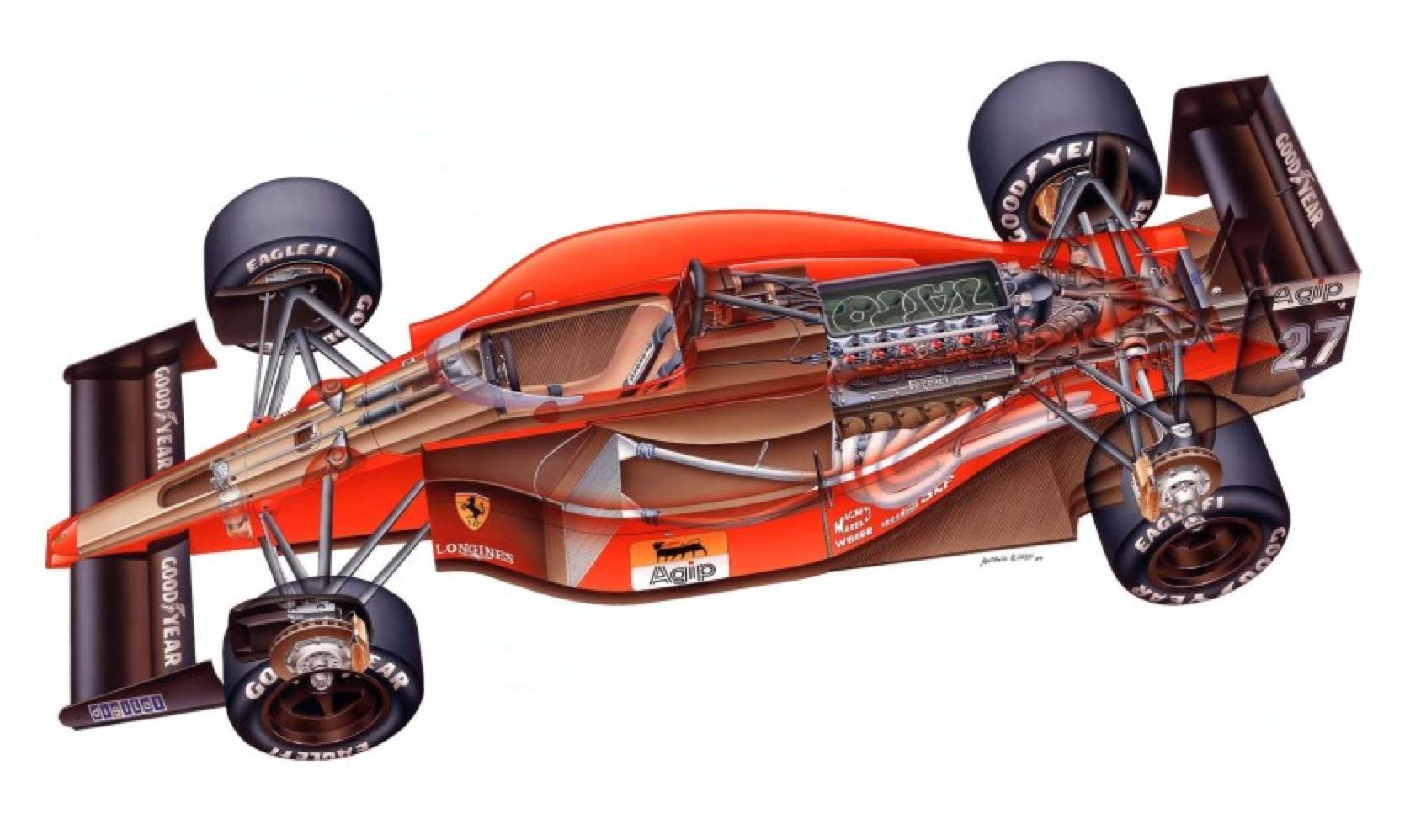 The 640 raced in 1989, was fast and attractive but, in pre-season testing, it appeared to be hopelessly unreliable, to the extent that, famously, Mansell even booked himself an early flight home from the first race of the year, in Brazil, only for the car to perform perfectly and win the race, on its debut.

Unfortunately, the car did turn out to be dreadfully unreliable throughout the season, Mansell only finished five of the remaining 15 races and teammate Gerhard Berger only reached the chequered flag three times.

But what about the “secret” car? It’s widely accepted that the Tyrell design Postlethwaite had come up with for 1989 was based on the “secret” car he had worked on at Ferrari, it has a striking resemblance to Barnard’s 640, and a year later they pioneered the high nose concept, which much like the paddle shift, was quickly adopted throughout the grid.

Observers at Maranello had spotted a high nose on the “secret” Ferrari project a couple of years earlier, and while Postlethwaite claimed the concept was developed once he was at Tyrell, Barnard believes the ideas he took to Tyrell were from the “secret” Ferrari design.

Barnard described the “secret” car as a pretty good effort, his issue wasn’t necessarily with the ideas being worked on it was the fact that there were people in Ferrari directly working against him.

Perhaps fittingly, Barnard got the last laugh again he was impressed by the high noses and the benefit it brought by forcing high speed airflow under the car, but he was less impressed by how Tyrell had achieved it.

The continued Ferrari politics got the better of Barnard and he moved to Benetton at the end of 1989. When the time came to design Benetton’s 1991 car, Barnard knew it made sense to borrow the high nose idea, but he came up with a better way of doing it.

He didn’t like the look of the Tyrell front wing, which he compared to a handlebar moustache, so he came up with a version that featured an uninterrupted front wing all the way across the front plane, with two pillars dropping down from the raised nose to attach it.

Barnard compared this design, to what was effectively a copy of the Tyrell concept, in the wind tunnel, and his version was much better. In the end, it was Barnard’s interpretation of the high nose and front wing that was copied by all the other teams on the grid.

Barnard got his revenge over the “secret” Ferrari project once more!! 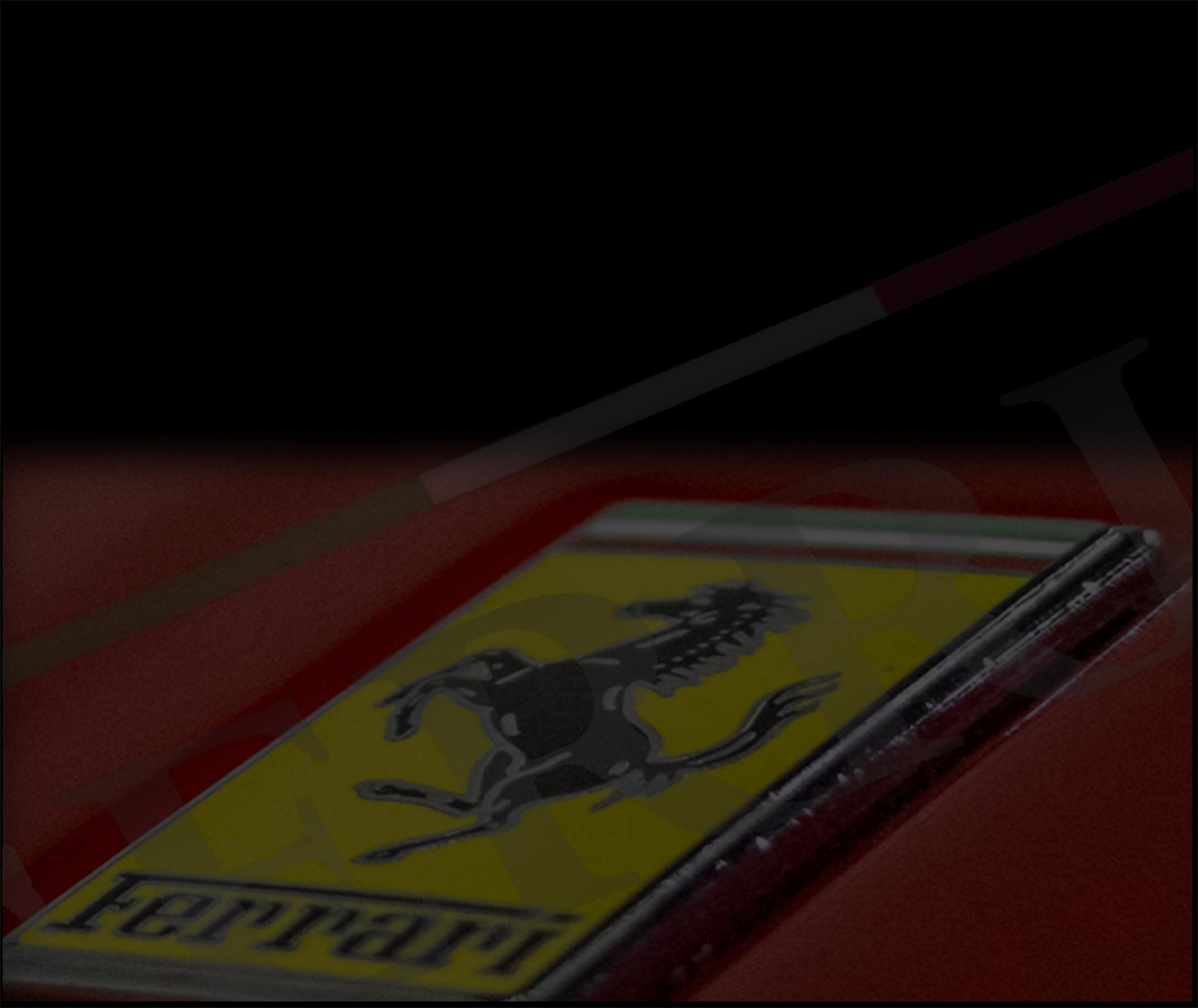