Newsletter 26: FERRARI IN THE MOVIES. 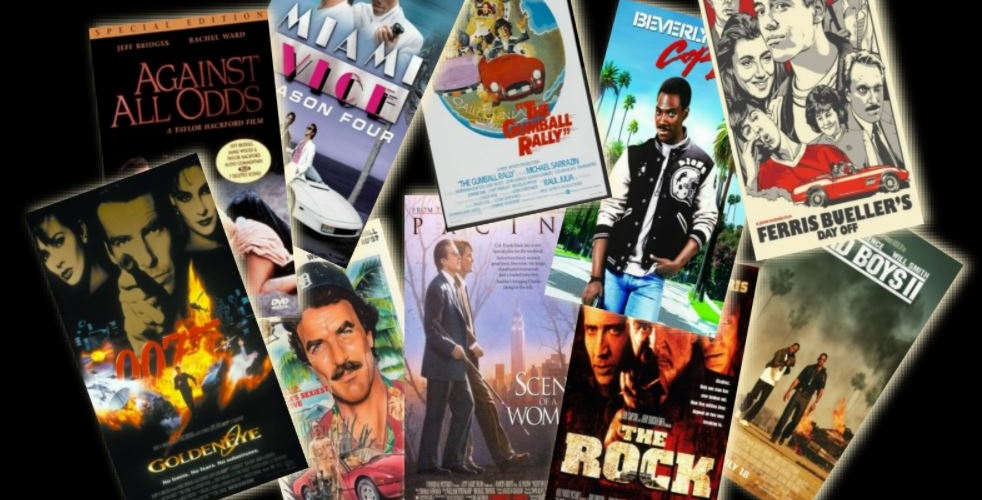 Movies have the power to make a regular story become iconic. They also have the power to immortalize certain moments for future generations. Nothing in a movie has more influence than a special car. The Ferrari Movies on this list are definite scene-stealers, beautiful machines that allowed enough screentime to become instantly memorable.

Truth be told, Ferraris are always bound to attract attention, regardless of where they are or who’s driving them. In the case of these, though, they’re given iconic status by being included in the storytelling process. So which ones made the cut?

Al Pacino can make any car look great, simply by sitting in it, but having his character drive the 1989 Ferrari Mondial T Cabriolet in this movie, acquired a different meaning by the fact that his character, Lieutenant Colonel Frank Slade was blind.

In a 6+ minute scene, we get to see the maniacal Colonel driving the Ferrari through a deserted Brooklyn neighbourhood, without even scratching it or missing a turn, until he somehow stumbles upon the only other car on the street, which just happens to be a cop car.
“Hoo-ah!”

Nicolas Cage has always had a soft spot for expensive, fast rides, and his star power allows him to have a say in the cars his characters end up driving on the big screen.

When he teamed up with Michael Bay for The Rock, he was lucky that Bay shared his passion, so he got to chase a Humvee H1 in a yellow Ferrari F355 Spider. Some of the footage used a replica and image manipulation, but the scene still includes plenty of real Ferrari awesomeness.

Mike Lowrey (Will Smith) was never one for subtlety, and this is also apparent in his choice of cars. In the first and third Bad Boys movies, he drives Porsches, but in the second, he got to chase down bad guys in a Ferrari 550 Maranello.

Michael Bay also directed the first two movies, so he took great pleasure in putting the 550 Maranello through its paces for our viewing pleasure, only adding some Hollywood trickery here and there when the stunts would have been too dangerous to do in real life.

Pierce Brosnan’s first outing as 007 came with a superb race down a winding mountain road between his Aston Martin DB5 and a red Ferrari F355 GTS driven by Famke Jenssen, while Bond’s psychologist, who was supposed to be evaluating him, screeched in fear and frustration in the passenger seat.

The race scene employed plenty of movie magic to help Bond keep up with the Ferrari, and ended without adding to the 007 body count. It’s pure Bond action, with smart puns and now-laughable come-on’s that would only ever work to pick up girls if your name is Bond ………. James Bond.

This is probably not a movie many remember, except for those who, upon viewing it, noticed that it features what is considered, to this day, one of the best car chase scenes in film history.

The chase is actually a street race between a red Porsche 911 SC Cabriolet and a black Ferrari 308 GTS, in reasonably heavy traffic along Sunset Boulevard and Bel-Air in Los Angeles, with zero damage to any car. James Woods’ place at the wheel of the 308 is taken by Carey Loftin, probably the most prolific and acclaimed stunt driver of all time, who strove to shoot the entire scene as realistically and with as little camera trickery as possible.

No respectable list of Ferrari Movies is complete without this mention. The Gumball Rally was a silly but hilarious movie, but it deserves credit for using real cars and showing them off in as realistic a manner as possible. The star of the film is, without a doubt, the 1971 Ferrari 365 GTB/4 Daytona Spider by Scaglietti. The actual car used in the movie sold for $1.65 million in 2013.

Perhaps one of the most memorable scenes is a race between the Daytona and a 1966 427 Shelby Cobra.

While this 1961 Ferrari 250 GT California Spider is often mentioned among the most iconic movie Ferraris of all times, it was in fact a replica.

Indeed, the film uses the replica for all scenes, including the one in which it meets its untimely demise, when Cameron takes out his anger and frustration towards his father on his most prized car, which then goes flying through a second storey window, crashing through trees, onto the floor below.

Life really can’t get much better for Axel Foley: he works as an undercover cop and is pretty good at his job, and he gets to drive a red Ferrari 328 GTS, paid for with taxpayers’ money.

The movie includes some pretty embarrassing goofs, like the use of a 308 in the first part of the movie, which then mysteriously becomes a much more expensive and newer 328, and then, in another scene turns into a 308 again. You have to watch the entire movie, just in case the car turns into another model!

And finally, who could forget Magnum P.I and Det. James ’Sonny” Crockett, each with really questionable fashion style with a flair for startling patterns and colours, and Crockett’s much more fashionable side kick, Ricardo Tubbs. All had great appeal to the ladies and even better taste in cars.

Magnum drove a red Ferrari 308 GTS (he was too tall for the GTB!), while Crockett and Tubbs drove a black 1972 365 GTS/4 Daytona Spider for the first two seasons. The Daytona was a replica, built on a Corvette chassis.

For season three the producers wanted a white Testarossa, the first two seasons had been such a success that Ferrari gave them one for free! The perfect ending to Ferrari Movies.