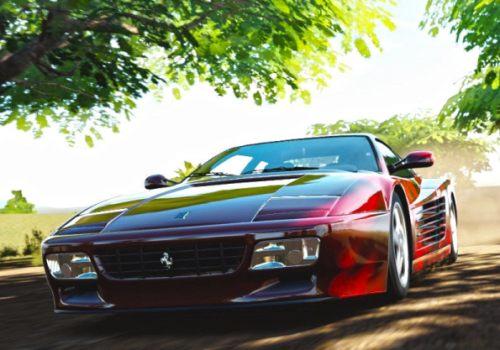 This week we are proud to have in stock a truly iconic example of one of Ferrari’s greatest creations, the 512 TR.

The original Testarossa, designed by Leonardo Fioravanti, was typical of the 1980’s excess, bigger, bolder and generally over the top, as substantiated by it’s competition at the time, the Lamborghini Countach, both of which adorned many a school boys bedroom wall and appeared in a plethora of TV shows and movies, then and even now.
Such memorable productions such as Beverly Hills Cop III, The Wolf of Wall Street, Snoop Dogg’s “Who am I” video and of course, the iconic TV series, Miami Vice.

The second generation in the Testarossa bloodline, and the one we have on offer, was the 512 TR. The car still retained the 4.9-litre, longitudinally rear-mounted flat-12 engine, with a total of forty-eight valves and lubricated via a dry sump system, however the 512 TR’s engine was extensively reworked. Nikasil liners were added, along with a new air intake system, Bosch engine management system, larger intake valves, and a revised exhaust system. In addition to the higher peak power, the modifications delivered a broader power band for better acceleration.

The 512 TR, according to the majority of Ferrari aficionados, was the best of the three derivatives. The 512’s replacement was the 512 M, and although the “M” had more power, upgraded suspension, electronics and features, the styling took a lot of enthusiasts by surprise. The perspex headlights, “busy” rear end and unusual wheel design, were met with a mixed reception by the media and customers.

The 512 featured a single-plate clutch, sliding ball bearings, and better angle for the gearshift knob. The braking system included larger cross-drilled front rotors, quicker steering, lower-profile tyres, and new shock settings improved handling. Most importantly, engine and gearbox position were reworked, which improved the centre of gravity, aiding the handling and making the car easier to drive than it’s predecessor.

There are less than a handful of 512’s in South Africa, making it a very desirable and collectable automobile. 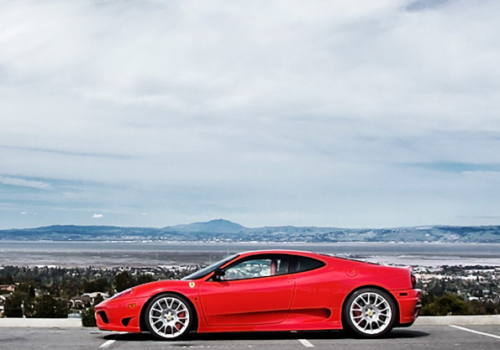 By quentin2supninjaFebruary 17, 2021Comments Off on FERRARI 360 MODENA

When new Ferrari President, Luca di Montezemolo took the helm in 1991, his goals were to get Ferrari back to the top in Formula 1 and up the ante in the exotic car market.

He managed to do this, very successfully, in Formula 1 by recruiting, amongst others, Michael Schumacher, Ross Brawn, Rory Byrne and Jean Todt, known as “The Dream Team”.

From a technology stand point, the 360 was the start of a new approach to car design at Ferrari, in fact, every car since 430, 458, 488 and so on, bear the design DNA of the 360. Modern, lightweight and sophisticated, it featured the company’s first aluminium monocoque and first fly-by-wire throttle control.

The 360 received mixed reviews when it debuted in 1999, but it was a bold move by Ferrari to steer away from evolutionary design to one that was revolutionary. Up to that point, most new cars were an evolution of the last.
The 308 morphed into the 328, into the Testarossa, into the 348 into the 355. All of similar construction and design cues. The 360, however, was a completely new design from the drawing board up.

At 40 percent lighter and nearly 30 percent stiffer than it’s predecessor’s steel platform, the 360 was a huge step forward for Ferrari.

Unlike the design elements, mechanically the 360 was very much an evolution of the F355. The engine, with a redesigned flat-plane-crank, was increased from 3.5 to 3.6 litres (hence 360 moniker) but it retained the same basic architecture, including the five-valve heads, and variable valve timing. Peak power was up, from 375bhp to 394bhp, and torque climbed slightly, from 268 to 275lb ft, but produced much lower in the rev-range, giving the 360 a much more muscular feel.

The 360 is almost in every respect a better car than the 355 –perfectly civilised in traffic yet accomplished hooligan when you want it to be, all the while with the unmistakeable sound of that beating Ferrari heart.

It has been two decades since the introduction of the Ferrari 360 Modena and it is still arguably the best all round Ferrari, be it your first, fifth or tenth time owning one.

It looks as modern as any Ferrari sold today, and can be acquired for less than a brand new BMW M3 (which will be worth less than half the purchase price after the first six months!)

Without a doubt, the 360 represents the most value for money Ferrari on the market today. It ticks all the boxes for owning a supercar, spacious interior, simple but functional layout, quick, sexy and timeless.

2000 360 Spider released. It’s mechanically identical to the coupe but features a electro-hydraulic folding roof and it’s 130lb heavier thanks to the extra chassis bracing.

2003 Challenge Stradale arrives complete with titanium springs, carbon ceramic brakes, Plexiglass windows, Alcantara covered carbon seats and a stripped-out interior, along with some carbon fibre panels such as the bonnet. The result is a car that’s 243lb lighter than standard while the V8 pumps out 425bhp. The CS model is available only with the F1 transmission, features 19-inch wheels and sits 15mm closer to the ground.

By quentin2supninjaJanuary 22, 2021Comments Off on Newsletter 4: MYTH BEHIND MILEAGE

This week we thought we’d explore the myth behind mileage, or in South Africa, kilometrage!

There seems to be a disconnect between age, condition and mileage, especially when talking about the Ferrari marque.

For example, an immaculate Ferrari from 2000 with 50,000k’s and a Full Service History is generally considered to be “a difficult sell”, purely based on the “high” mileage. Paradoxically, an immaculate, comparable   Porsche from the same year with 100,000k’s is considered “a good buy”.

Let’s explore the psyche behind this way of thinking.

Is it a preconceived brand reliability theory? Who knows!

In the super car market place, Ferrai has no more reliability concerns than any other-high end marque, in fact, quite the contrary. Without naming and shaming, there are manufacturers of top performing super cars who’s build quality, reliability and re-sale values are nowhere near that of Ferrari.

Here’s the thing, when buying a car, any car, the thing to look out for is a reputable and complete service history.

As for cars with higher mileage, Paolo Martinelli, Chief Engine Designer for Ferrari, once told me that cars, especially high revving performance cars, will only be properly bedded in and have found there “sweet spot” at around 60,000 to 70,000k’s. From then on it’s a simple question of regular maintenance. Most problems or issues occur between zero and 50,000 to 60,000k’s.

An automobile manufacturer creates a car that is designed to be driven. We buy said car, drive it (for the purpose which it was intended) and then get penalised when we want to sell it. All because it has been used for the exact purpose for which it was designed.

It’s an odd mindset and even odder that it only applies to certain brands, mostly without any kind of logic or substantiation.

So the message we are enforcing is, “Don’t be afraid of higher mileage, the car has simply done what it was designed to do.” 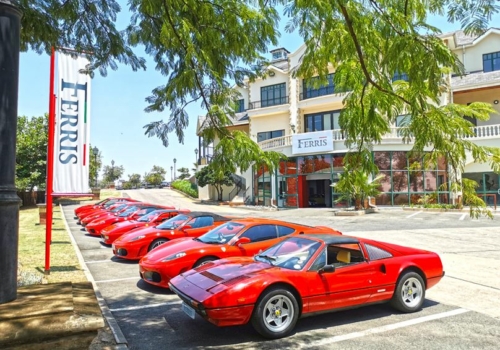 By quentin2supninjaJanuary 15, 2021Comments Off on Newsletter 3: MERCHANDISE STORE

Week three of the first month of 2021 and things are coming along nicely.

We are currently busy finalising our regalia and merchandise store which will stock a myriad of Ferrari and other models, model kits, clothing, art and collectables.

Watch this space for further updates, as they happen.

We are planning quite a few functions for the coming year, sadly due to COVID restrictions, we are unable to confirm a lot of them just yet.

Planned events will include:

current COVID restrictions prevent us from having an official launch of the new showroom any time soon. As soon as we are able we will have some sort of get together!

By quentin2supninjaJanuary 8, 2021Comments Off on Newsletter 2: MECHANIC EXTRAORDINAIRE

Seems like we are off to an encouraging start, despite the continued effects of the Covid situation, with a few sales, lots of enquiries, leads and interest.

This week we want to introduce Roberto Leo, mechanic extraordinaire, fixer of cars, solver of problems and all-round nice guy.

If you are a Ferris client, Ferrari owner or associated in some way with the brand, chances are you’ll already know he is.

Basically, he’s the go-to guy for any Ferrari related maintenance, repairs, fixes and fault finding, not only Ferrari but other high-end marques as well.

Having a solid back-up, maintenance and services facility is important to us and our clients, so having Roberto, aided by his very capable right-hand man, Franco Simbane is a blessing. 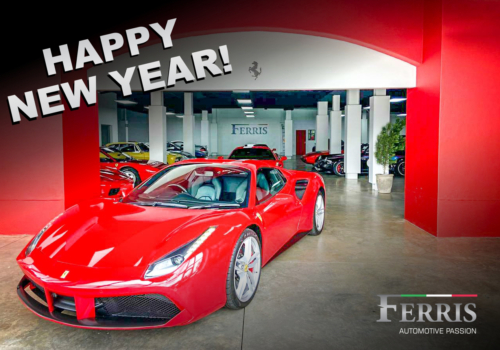 By quentin2supninjaJanuary 1, 2021Comments Off on Newsletter 1: WE ARE OPEN !!

The New Ferris is now open, revamped and revitalised for 2021.

You are welcome to pop in for a coffee, meet the Ferris Team for a chat about Ferrari and your other favourite exotic cars, or get expert advice about your next supercar purchase.

DELIVERING OUR FIRST CAR OF 2021

While this car shifts gear faster than the blink of an eye, it’s day one and the Ferris Team is shifting gear to get this 488 Spider delivered to a very happy Ferris Client in Cape Town!